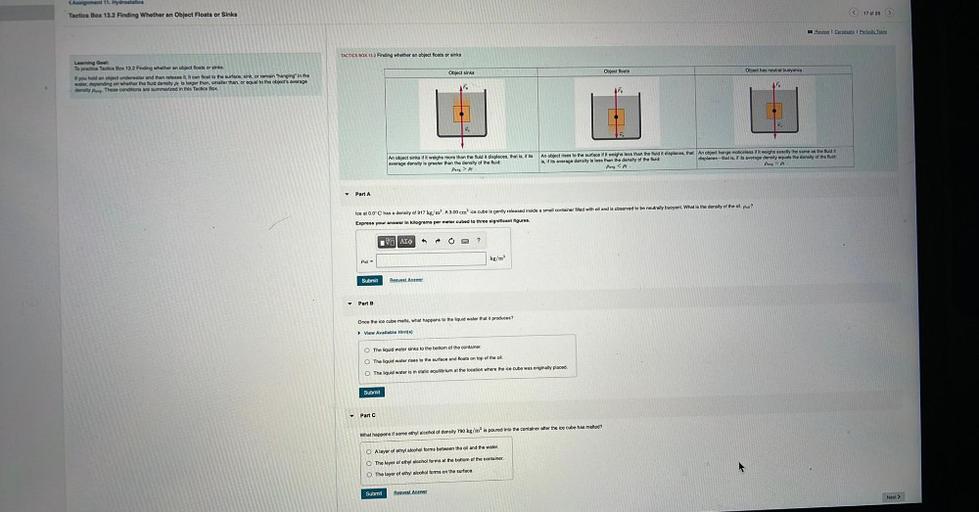 CAssignment 11. Hydrostatica Tactics Box 13.2 Finding Whether an Object Floats or Sinks 17 of 28 > Review Constanta Periodic Table TACTICS BOX 132 Finding whether an object floats or sinks Object sinks Object floats Object has neutral buoyancy Learning Goal: The practice Tactics Box 132 Finding whether an object floats or sinko. you hold an et underwater and then release it, can float to the surface, sink, or romain hanging in the we depending on whether the fuld density Ar is larger than, smater than or equal to the object's average density ferg. These conditions are summarized in this Tactics Box An object sinks if it weighs more than the fluid displaces, that is, its average density is greater than the density of the fluid Por > PI An object rises to the surface if it weighs less than the fluid it displaces, that an object hangs motionless it weighs exactly the same as the fluidit is, if its average density is less than the density of the fluid: displaces--that is, its average density oquals the density of the fuld Pave Pr Pave Part A Ice at 0.0 C has a density of 917 kg/ mA 3.00 cm ice cube is gently released inside a small container filled with oil and is observed to be neutrally buoyant. What is the density of the ol, pod? Express your answer in kilograma per meter cubed to three significant figures. 2 0 TO AE pl Submit Resvest Ant Part 3 Once the ice cube melts, what happens to the liquid water that it produces? View Available Hint(o) The liquid water sinks to the bottom of the container. O The liquid water rises to the surface and floats on top of the ol O The liquid water is in static equilibrium at the location where the ice cube was originally placed Submit Part C What happens if some ethyl alcohol of density 790 kg/mois poured into the container after the ice cube has melted? O A layer of ethyl alcohol forms between the oil and the water The layer of ethyl alcohol forms at the bottom the container. O The layer of ethyl alcohol forms on the surface Submit Request Answer Next >

A paper helicopter with rotor radius r and weight W is dropped from a height h in air with a density of p. Assuming that the helicopter quickly reaches terminal velocity, a function for the time of flight T can be found in the form T = kh"rp"W". where k is an unknown dimensionless constant, a, B. 6, and o are constant exponents to be determined. Experimental observation show that a = B. Mark the CORRECT statement(s);