A 10 cm thick piston sits inside a cylinder containing 0.1 kg of water. An internal flange is built into the cylinder and serves to stop the control volume from expanding. The mixture is expanded from an initial value of Vi = 0.82 m³ and Ti = 20 °C. The cross-sectional area of the piston is 1.43 m². a) Enough heat is added so that the piston just barely comes in contact with the flange. Determine the work done W₁₂ and heat added Q₁₂.

A desktop computer is to be cooled by a fan whose flow rate is 0.34 m³/min. Determine the mass flow rate of air through the fan at an elevation of 3400 m where the air density is 0.7 kg/m³. Also, if the average velocity of air is not to exceed 115 m/min, determine the diameter of the casing of the fan.

A steam power plant receives heat from a furnace at a rate of 280 GJ/h. Heat losses to the surrounding air from the steam as it passes through the pipes and other components are estimated to be about 8 GJ/h. The waste heat is transferred to the cooling water at a rate of 168 GJ/h. Determine the thermal efficiency of this power plant.

What are the three parts of the 2nd law of thermodynamics? Heat will not flow spontaneously from a cold to a hot body You cannot construct an engine that does nothing but convert heat to useful work Every isolated system becomes more disordered with time Energy and mass are interchangeable The acceleration produced on a body by a force is proportional to the magnitude of the force Objects in motion stay in motion unless acted upon by an external force. For every action there is an equal and opposite reaction

d) They have the same size 12. A system in thermodynamies is A. A mechanical system very well defined 3. Part of the universe Into investigation (or in study) C. A cooperation between two or more objects D. One of the atmosphere layers in the Universe 13. An open systems A. Abystems that takes in air and close 1. A mechanical pump that opens every second C. Part of the water inte investigation that allows the low of energy and D. Alodieties of the direction of the flow of matter 14. Astrated wymi A la dissoluta Afree wyst C. A completely pred vystum D. A that does not allow flow of enemy and S. 5. The Electric Field Lines are: a) Symmetric b) Nor symmetrie c) Linear d) No linear. 6. Electrie Potential due to a point charge is: a) Inversely proportional to the charge q, b) Directly proportional to the point charge c) Absolutely not related d) None of the above. 7. The capacitance of a parallel-plates capacitor is a) Directly proportional to the surface area of the Plate b) loversely proportional to the surface area of the Plate, c) Equal to the total energy of the capacitor, d) All the above 8. Thermodynamics is: a) A part of physics that force the air to move around the planet, b) A part of physics that studies the heat flow between systems, c) A gravitational force, d) All the above. 9. The thermometer is a a) Device used to measure mass of an object, b) Device used for measuring a potential difference, c) Device used to measure the temperature of an object d) Device used for measuring thermal work 10.Two objects are in thermal contact ir .) They touch each other, b) They can move toward each other, c) Energy can be exchanged between them, d) Their energies are the same 11. Twears are in thermal equilibrium if .) They are in the same location, - They are in thermal contact, and there is no net exchange of 15. A desde 4. Part of the wine that shows all ads A that allows the few of new but tot mass C. That allows flow of hunt D. Ne of the above Atis systems 4. A stem that has no material change with the environment 3. A system that has so thermal interaction with the astounding e. A system that give energy to the stonment D. Ale that not very well defined 17. Convert 80 degrees Fahrenheit Into degrees Celsius and then into degrees Kelvin . They code, and move in the same direction,

Use the References to access important values if needed for this question. A sample of solid zinc is heated with an electrical coil. If 62.1 Joules of energy are added to a 10.4 gram sample and the final temperature is 37.1°C, what is the initial temperature of the zinc? Answer: °C. Submit Answer Retry Entire Group 1 more group attempt remaining Next Previous ( 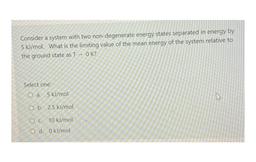 Consider a system with two non-degenerate energy states separated in energy by 5 kJ/mol. What is the limiting value of the mean energy of the system relative to the ground state as T - OK? Select one: O a. 5 kJ/mol O b. 2.5 kJ/mol OC. 10 kJ/mol O d. 0 kJ/mol