Pag question Question 19 A musical instrument produces a frequency of 1276.9 when it vibrates in the fifth harmonic. The fundame

Pag question Question 19 A musical instrument produces a frequency of 1276.9 when it vibrates in the fifth harmonic. The fundamental frequency of this Not yet instrument is answered Narked out of 1.00 Flag question 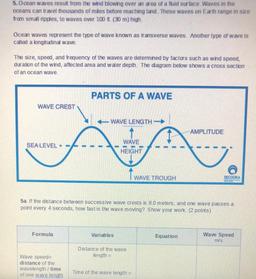 5. Ocean waves result from the wind blowing over an area of a fluid surface. Waves in the oceans can travel thousands of miles before reaching land. These waves on Earth range in size from small ripples, to waves over 100 ft. (30 m) high, Ocean waves represent the type of wave known as transverse waves. Another type of wave is called a longitudinal wave. The size, speed, and frequency of the waves are determined by factors such as wind speed, duration of the wind, affected area and water depth. The diagram below shows a cross section of an ocean wave. PARTS OF A WAVE WAVE CREST WAVE LENGTH - AMPLITUDE WAVE SEA LEVEL - HEIGHT T WAVE TROUGH SECOORA 5a. If the distance between successive wave crests is 8.0 meters, and one wave passes a point every 4 seconds, how fast is the wave moving? Show your work. (2 points) Formula Variables Equation Wave Speed m/s Distance of the wave length = Wave speed= distance of the wavelength/time of one wave length Time of the wave length = 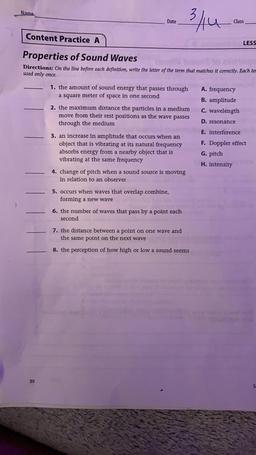 Nama 3/4 Date Class Content Practice A LESS Properties of Sound Waves Directions: On the line before each definition, write the letter of the term that matches it correctly. Each tem used only once. 1. the amount of sound energy that passes through A. frequency a square meter of space in one second B. amplitude 2. the maximum distance the particles in a medium C. wavelength move from their rest positions as the wave passes D. resonance through the medium E. interference 3. an increase in amplitude that occurs when an object that is vibrating at its natural frequency F. Doppler effect absorbs energy from a nearby object that is G. pitch vibrating at the same frequency H. intensity 4. change of pitch when a sound source is moving in relation to an observer 5. occurs when waves that overlap combine, forming a new wave 6. the number of waves that pass by a point each second 7. the distance between a point on one wave and the same point on the next wave 8. the perception of how high or low a sound seems 30 S. 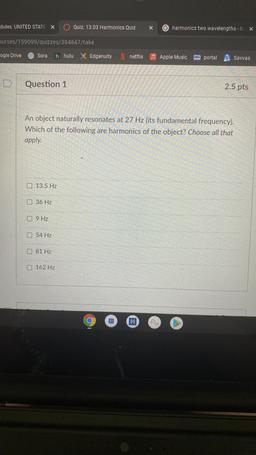