Q. 15. A sample of fossilized wood has a carbon-14 decay rate of 6.00 disintegrations per minute per gram. Detemine the age of t

A wooden artifact from an ancient tomb contains 45 percent of the carbon-14 that is present in living trees. How long ago, to the nearest year, was the artifact made? (The half-life of carbon-14 is 5730 years.) years. 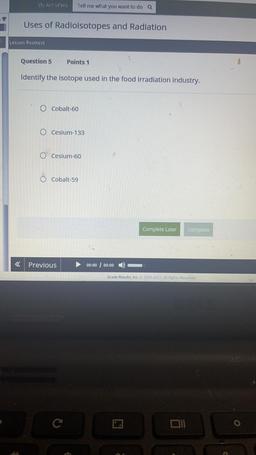 One important application of radioactivity is the determination of the age of archaeological or geological samples. If an object contains radioactive nuclei when it is formed, then the decay of these nuclei marks the passage of time like a clock, half of the nuclei disintegrating during each half-life. If the half-life is known a measurement of the number of nuclel present today relative to the number present initially can give the age of the sample. The radiocarbon technique utilizes the 6 isotope of carbon, which undergoes - 14c decay with a half-life of 2 x 1011 sec. This isotope is present in the earth's atmosphere at an equilibrium concentration of about one atom for every 7 * 1011 atoms of normal 14c It is often assumed that this value has remained constant over the years because 6 is created when cosmic rays interact with the earth's upper atmosphere, a production method that offsets the loss via decay. Moreover, nearly all living organisms ingest the equilibrium concentration of 6 140 However, once an organism dies, 14 C 14c metabolism no longer sustains the input of 6 and ß decay causes half of the 6 nuclei to disintegrate every 2 x 1011 sec. Take in 2 = 0.7 carbon 6?c In the Italian Alps, German tourists found a Stone-Age traveller, later dubbed the Ice Man, whose body had become trapped in a glacier. Material found with the body had a 14c 6 activity of about 0.125 Bq per gram of carbon. Find the age (in 10" sec) of the Ice Man's remains.