Questions #19-20: A particular ocean buoy has a mass of 370. kg and a volume of 2.50 m². Assume that ocean water has a density of 1030 kg/m3. 19. While the buoy is floating in equilibrium on the surface of the ocean, what percentage of its volume is located below the water surface? Please enter a value between 0 and 100: percent Calculate and enter your final answer to at least 3 significant figures. There is no penalty for including too many significant figures, but rounding to too few sig figs may cause Laulima to judge your answer to be wrong. • Do NOT enter units with your answer; enter only a numerical response. Laulima will count non-numerical answers as incorrect. • Partial credit is NOT possible. . Mark for Review What's This? 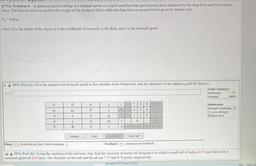 (17%) Problem S: A spherical particle falling at a terminal speed in a liquid must have the gravitational force balanced by the drag force and the buoyant forco. The buoyant force is equal to the weight of the displaced fluid, while the drag force is assumed to be given by Stokes Law: Fa - 6xRov where R is the radius of the object, n is the coefficient of viscosity in the fluid, and vis the terminal speed, 50% Part (n) Give the equation for terminal speed in the variables from Stokes law, and the densities of the sphere P, and the fluid n 8 a 00 9 Grade Summary Deductions 09 Potential 10096 Submissions Attempts remaining: 29 (64 per attempo) detailed view C7 4 Pi a 3 6 B PS c j R ON 1 2 3 d k h m 0 - P S + VO Submit Hant I give up! Fints: 055 deduction per hint. Hints remaining Feedback: 04 deduction per feedback 50% Part (b) Using the equation of the previous step, find the viscosity of motor oil in kgm/s) in which a steel ball of radius 195 mm falls with a terminal speed of 134 cm/s. The densities of the ball and the oil are 7.72 and 0.76 gml, respectively. TE ING 1051A 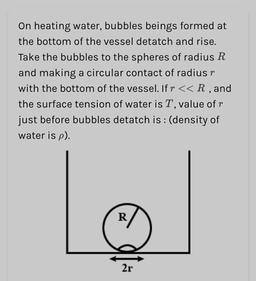 Video Assignment 3 1. Create a prototype to represent examples of a fully open and a partially clogged blood vessel. The fully open blood vessel has a diameter of 1 cm whereas the clogged blood vessel diameter is narrowed to 0.5 cm. If the length of the vessel segment under consideration is 1 cm long (assume the blockage is for the entire 1 cm section), determine the fluidic resistance for each case. Also, if the pressure drop across the segment is 5 Pa, estimate the total flow rate for each case. Viscosity of blood is 0.0012 Pa.s. A potential solution to a blocked vessel is a bypass. If you create a bypass (i.e.) add a vessel with diameter 0.5 cm and length of 1 cm in parallel, estimate the new fluidic resistance? Based on the new fluidic resistance, do you anticipate the flow rate to be restored?