5. The Electric Field Lines are: a) Symmetric b) Not symmetric c) Linear d) No linear. 6. Electric Potential due to a point char 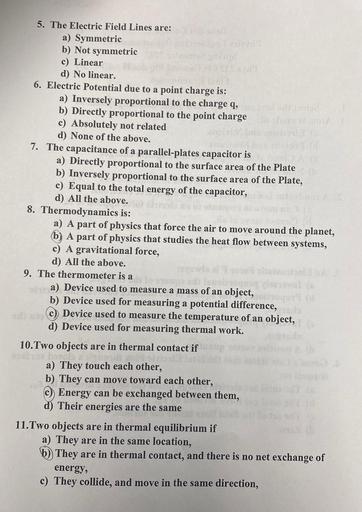 5. The Electric Field Lines are: a) Symmetric b) Not symmetric c) Linear d) No linear. 6. Electric Potential due to a point charge is: a) Inversely proportional to the charge q, 1998 b) Directly proportional to the point charge c) Absolutely not related d) None of the above. 7. The capacitance of a parallel-plates capacitor is a) Directly proportional to the surface area of the Plate b) Inversely proportional to the surface area of the Plate, c) Equal to the total energy of the capacitor, d) All the above. 8. Thermodynamics is: a) A part of physics that force the air to move around the planet, b) A part of physics that studies the heat flow between systems, c) A gravitational force, d) All the above. 9. The thermometer is a pizo mo a) Device used to measure a mass of an object, b) Device used for measuring a potential difference, C) Device used to measure the temperature of an object, d) Device used for measuring thermal work. 10.Two objects are in thermal contact if a) They touch each other, b) They can move toward each other, C) Energy can be exchanged between them, d) Their energies are the same 11.Two objects are in thermal equilibrium if a) They are in the same location, b) They are in thermal contact, and there is no net exchange of energy, c) They collide, and move in the same direction,

An electric field has a uniform value (doesn't change with position) that can be described by the following equation: E = (A3+ B^N/C where A and B are given by the values below. A = 5.90 B = 6.70 There is a flat circular surface that is in the x-y plane and centered at the origin point (0,0,0). This surface has a radius of 1.15 m. Calculate the magnitude of the electric flux through the surface due to the electric field described above. Your units should be Nm2/C. Your answer should include the following: 2 Decimal places A number written out and NOT in scientific notation. You can't put in an answer with powers of 10 in this question. You have to write out the number: For Example:

Dipole moment of H2O is 1.85 D. If bond angle is 1.5º and O-H bond length is 0.94Å , determine magnitude of the charge on the oxygen atom in the water molecule. From the bond angle and vector moment u= exl. Thus, e (charge) can be determined in esu. Correct Answer