Center of mass and momentum Questions 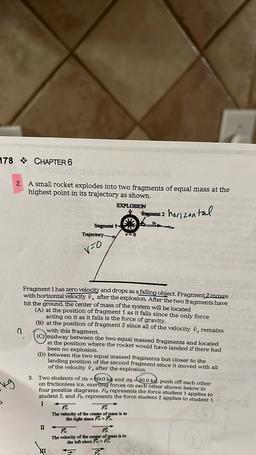 23. Which of the following have greater momentum than a 12 kg ball rolling at 6 m/s? Select all correct answers. (a) A 40 kg ball that is stationary (b) A 60 kg ball rolling at 3m/s (c) A 30 kg ball rolling at 2m/s (d) 18 kg ball rolling at 5m/s 24. A 1200 kg car travelling at 12m/s to the east collides with a 4000 kg truck that is initially at rest at a stoplight. The car and the truck stick together and move together after the collision. What is the final velocity of the two-vehicle mass? 25. A grocery shopper tosses a 10 kg bag of rice into a stationary 20 kg grocery cart. The bag hits the cart with a horizontal speed of 5m/s toward the front of the cart. What is the final speed of the cart and the bag? 26. A boy on a 1.8 kg skateboard initially at rest tosses a 6 kg jug of water in forward direction. If the jug has a speed of 2.6 m/s relative to the ground and the boy and the skateboard move in the opposite direction at 0.5 m/s, find the boy's mass. 27. A 48 kg student runs down the sidewalk and jumps with a horizontal speed of 3.8 m/s onto a stationary skateboard. The student and the skateboard move down the sidewalk with a speed of 3.9 m/s. Find the mass of the skateboard. 28. In problem 27, how fast the student would have to run initially to have a final speed of 4.9 m/s? 29. A 0.6 kg ball is thrown with a velocity of 18 m/s to the right. A stationary receiver catches the ball and brings it to rest in 0.03 s. What is the force exerted on the ball by the receiver? 30. A bumper car of mass of 80 kg is travelling at 3.5 m/s. A bumper car of 90 kg is travelling at 1.5 m/s in the opposite direction. After the collision, the 80 kg bumper car travels at -0.4 m/s. What is the speed of the 90 kg bumper car? 11. One of the acute angles of a right triangle is 37°. Determine the other angle as well as its Sine,Cosine and Tangent values. 12. What is the normal force of an object with mass 50 kg and sits on a table? 13. An object that is at rest on an incline. Which of the following forces is causing the object not to slide? (a) Gravitational force (b) Normal force (c) Frictional force (d) Applied force PIC.COLLAGE

PHYSICS (H) Period 3 x E RollerCoasterSE - Google Docs X Admin K C quest.cns.utexas.edu/student/instances/administer?instance=coun De student hf233.org bookmarks Classroom Norms -... My Activities || Conj. Ma Fal 2021 Honors Physics (332332) Momentum 1 due end of class Adminster PDF w/o expl Your response. 6. Bouncing a Superball 10 pts possible A child bounces a 47 g superball on the sidewalk. The velocity change of the superball is from 22 m/s downward to 15 m/s upward. 1 If the contact time with the sidewalk is 800 s, what is the magnitude of the average force exerted on the superball by the sidewalk? Answer in units of N. 1 | 2 | 3 | 4* | 5* | 6* | 7 | 8* | * indicates slides with an unanswered ques | Accessit 2020 College of Natur 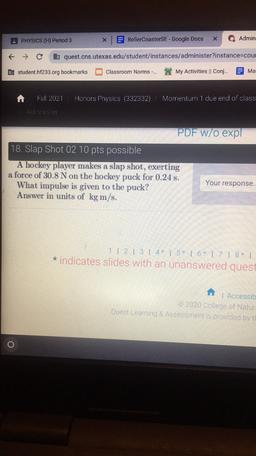 (HW33 - Chapter 10 - Section 4&amp;amp;8 - Area and Mass Moments Fundamental Problem 10.7 1 of 3 Review Take that a = 320 mm and b = 180 mm Part A Determine the moment of inertia of the cross-sectional area of the channel with respect to the y axis (Figure 1) Express your answer to three significant figures and include the appropriate units. Figure 1 of 1 ? HA 50 mm I, = 5.193 mº 50 mm Submit Previous Answers Request Answer X Incorrect; Try Again So mm Next

nents ts <HW33 - Chapter 10 - Section 4&amp;amp;8 - Area and Mass Moments Problem 10.99 - Enhanced - with Hints and Feedback 3 of 3 hs 2 Review Consider the thin plate shown in (Figure 1). Suppose that a = 160 mm , b = 460 mm , r = 50 mm . The material has a mass per unit area of 20 kg/m². Part A Figure < 1 of 1 Determine the mass moment of inertia of the thin plate about an axis perpendicular to the page and passing through point 0. Express your answer to three significant figures and include the appropriate units. se Online View Available Hint(s) Syllabus a ? MA and ring Io = Value Units nt Survey b Submit a a Next > < Previous MacBook Air

11:44 Take Quiz Exit You started this quiz near when it was due, so you won't have the full amount of time to take the quiz. x D Question 2 7 pts A ball (object A) of mass 1.97 kg is rolling to the right with a velocity of 2.07 m S and it strikes another ball of mass 0.34 kg at rest. If the collision is elastic, what is the velocity of ball A immediately after the collision? (You may need to calculate both velocities for this!) Submit your answer without units and do your calculations in Si. D Question 3 7 pts a A 13.9-kg hammer strikes a nail at a velocity of 9

11:42 Take Quiz Exit past homework problem sets or other assignments from this class. o A scientific calculator and scratch paper D Question 1 7 pts A 55.4-kg fisherman in a 70.3-kg boat throws a package of 15-kg horizontally to the right with a speed of 13.8 m/s. Assuming that the entire system is at rest before the package is thrown, calculate the speed of the fisherman and the boat after the package is thrown using conservation of momentum. m Do all your calculations in Sl and submit your answer without units. Ignore any minus signs with your answer when you submit. 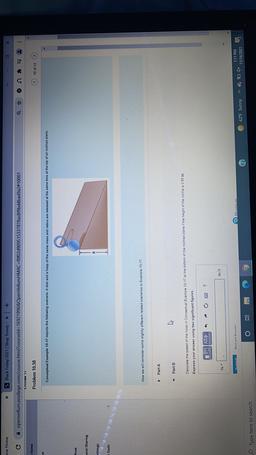