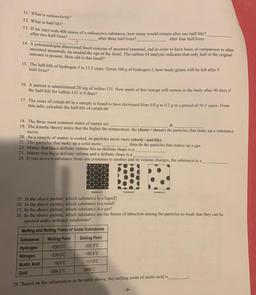 11. What is radioactivity? 12. What is half-life? after three half-lives? after four half-lives ? 13. If we start with 400 atoms of a radioactive substance, how many would remain after one half-life? after two half-lives? 14. A paleontologist discovered fossil remains of ancestral mammal, and in order to have basis of comparison to other ancestral mammals, he needed the age of the fossil. The carbon-14 analysis indicates that only half of the original amount is present. How old is this fossil? 15. The half-life of hydrogen-3 is 12.3 years. Given 100 g of hydrogen-3, how many grams will be left after 5 half-lives? 16. A patient is administered 20 mg of iodine-131. How much of this isotope will remain in the body after 40 days if the half-life for iodine-131 is 8 days? 17. The mass of cobalt-60 in a sample is found to have decreased from 0.8 g to 0.2 g in a period of 10.5 years. From this info, calculate the half-life of cobalt-60 18. The three most common states of matter are & 19. The kinetic theory states that the higher the temperature, the (faster / slower) the particles that make up a substance move. 20. As a sample of matter is cooled, its particles move more (slowly / quickly). 21. The particles that make up a solid move than do the particles that makes up a gas. 22. Matter that has a definite volume but no definite shape is a 23. Matter that has a definite volume and a definite shape is a 24. If you move a substance from one container to another and its volume changes, the substance is a Substance A Substance Substance 25. In the above picture, which substance is a liquid? 26. In the above picture, which substance is a solid? 27. In the above picture, which substance is a gas? 28. In the above picture, which substance are the forces of attraction among the particles so weak that they can be ignored under ordinary conditions? Melting and Boiling Points of Some Substances Substance Melting Point Boiling Point Hydrogen -259.3°C -252.9°C Nitrogen -210.0°C -195.8°C Acetic Acid 16.6°C 117.9°C Gold 1064.2°C 2856°C 29. Based on the information in the table above, the melting point of acetic acid is -2-

[References] TUTOR Determining Density from Unit Cell Data BaF2 crystallizes with the CaF2 structure which is represented in the following model, with the anions in green. If the edge length of the unit cell is 618 pm, what is the density of crystalline BaF2 in g/cm3? g/cm3

[References) TUTOR Determining Metallic Radii from Unit Cell Data Metallic chromium crystallizes in a body-centered cubic lattice, with one Cr atom for each point in the crystal lattice. How many atoms are there per unit cell? If the edge length of the unit cell is found to be 291 pm, what is the metallic radius of Cr in pm? atoms pm 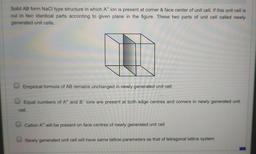