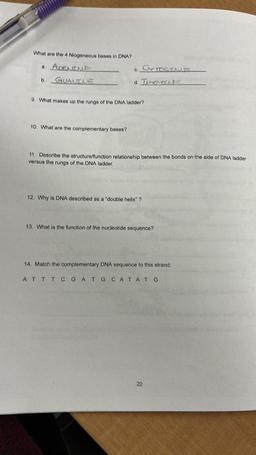 What are the 4 Niogeneous bases in DNA? a ADENINE 0., GY TOSINE b. GUANTNE d. THEMEN 9. What makes up the rungs of the DNA ladder? 10. What are the complementary bases? 11. Describe the structure/function relationship between the bonds on the side of DNA ladder versus the rungs of the DNA ladder. 12. Why is DNA described as a "double helix" ? 13. What is the function of the nucleotide sequence? 14. Match the complementary DNA sequence to this strand: AT TTC GAT GCATAT G 22

10 points Save Answer QUESTION 9 Which of the following does not describe the structure and function of hemoglobin ? A. tetrapyrrole ring system OB. Fe2+ C. Oxygen transport D. Quaternary Structure + E. Amino acid transport