3) Which one of the below is a good protecting group for the amine R2NH If it has to protect against both acidic and basic aqueous conditions? Explain why (2-3 sentences max) RN RON b) Jenna my more variet R c) 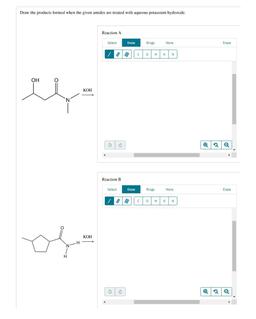 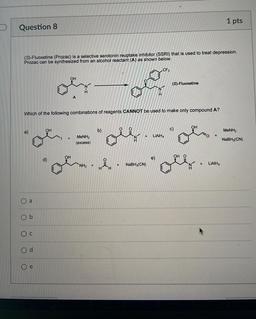 1 pts Question 8 (S)-Fluoxetine (Prozac) is a selective serotonin reuptake inhibitor (SSRI) that is used to treat depression. Prozac can be synthesized from an alcohol reactant (A) as shown below. CF3 OH 0 (S)-Fluoxetine A Which of the following combinations of reagents CANNOT be used to make only compound A? OH a) OH b) c) MeNH2 o + LIAIHA + MeNH2 (excess) NaBH3(CN) ora ore.de - OH d) e) OH O NaBH3(CN) + + LIAIHA + H a Ob Oc Od Oe 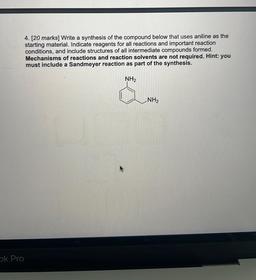 4. [20 marks] Write a synthesis of the compound below that uses aniline as the starting material. Indicate reagents for all reactions and important reaction conditions, and include structures of all intermediate compounds formed. Mechanisms of reactions and reaction solvents are not required. Hint: you must include a Sandmeyer reaction as part of the synthesis. NH2 NH2 ok Pro

Draw the condensed structural or line-angle formulas for the products from the hydrolysis of each of the following. Heat H-C-NH + NaOH Draw the molecules on the canvas by choosing buttons from the Tools (for bonds). Atoms, and A charges where needed. The single bond is active by default H: 20 por 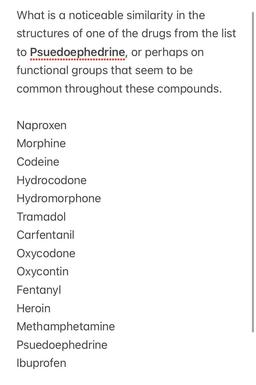 What is a noticeable similarity in the structures of one of the drugs from the list to Psuedoephedrine, or perhaps on functional groups that seem to be common throughout these compounds. Naproxen Morphine Codeine Hydrocodone Hydromorphone Tramadol Carfentanil Oxycodone Oxycontin Fentanyl Heroin Methamphetamine Psuedoephedrine Ibuprofen

Draw the condensed structural or line-angle formulas for the products from the hydrolysis of each of the following. 0 CH; ILI CH; -C-N-H + H2O + HCI Heat Draw the molecules on the canvas by choosing buttons from the Tools (for bonds charges where needed. The single bond is active by default DOC. ®H: 20 P. com a H # 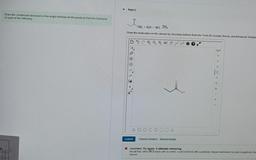 Part C Draw the condensed structural or line-angle formulas for the products from the hydrolysis of each of the following NH, + H2O + HCI Heat Draw the molecules on the canvas by choosing buttons from the Tools (for bonds), Atoms, and Advanced Templam D) @ BH 122 ? c N o S ci 7 Br OH 1 P F AU Submit Previous Answers Request Answer 22 X Incorrect; Try Again: 5 attempts remaining Recall that when HCl reacts with an amine, a salt is formed with a positively charged ammonium ion and a negatively cha answer 12 15.10

Draw the condensed structural or line-angle formulas for the products from the hydrolysis of each of the following Heat NH, + H2O + HCI Draw the molecules on the canvas by choosing buttons from the Tools (for bonds), charges where needed. The single bond is active by default C. 20 H: 122 GONE O O IL H C N 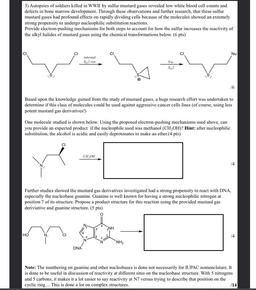 3) Autopsies of soldiers killed in WWII by sulfur mustard gases revealed low white blood cell counts and defects in bone marrow development. Through these observations and further research, that these sulfur mustard gases had profound effects on rapidly dividing cells because of the molecules showed an extemely strong propensity to undergo nucleophilic substitution reactions. Provide electron-pushing mechanisms for both steps to account for how the sulfur increases the reactivity of the alkyl halides of mustard gases using the chemical transformations below. (6 pts) Nu internal Sy2ro Nu: Sy2 0 $ 16 Based upon the knowledge gained from the study of mustard gases, a huge research effort was undertaken to determine if this class of molecules could be used against aggressive cancer cells lines (of course, using less potent mustard gas derivatives!) One molecule studied is shown below. Using the proposed electron-pushing mechanisms used above, can you provide an expected product if the nucleophile used was methanol (CH3OH)? Hint: after nucleophilic substitution, the alcohol is acidic and easily deprotonates to make an ether (4 pts) CH,OH 14 Further studies showed the mustard gas derivatives investigated had a strong propensity to react with DNA, especially the nucleobase guanine. Guanine is well known for having a strong nucleophilic nitrogen at position 7 of its structure. Propose a product structure for this reaction using the provided mustard gas deriviative and guanine structure. (5 pts) INH HO mah 14 NH2 DNA Note: The numbering on guanine and other nucleobases is done not necessarily for IUPAC nomenclature. It is done to be useful in discussion of reactivity at different sites on the nucleobase structure. With 5 nitrogens and 5 carbons, it makes it a lot easier to say reactivity at N7 versus trying to describe that position on the cyclic ring... This is done a lot on complex structures. /14 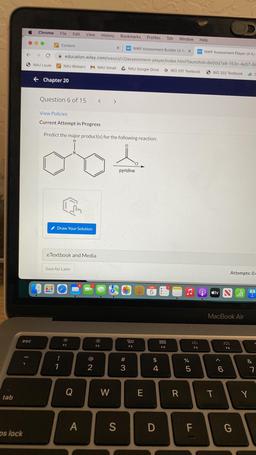 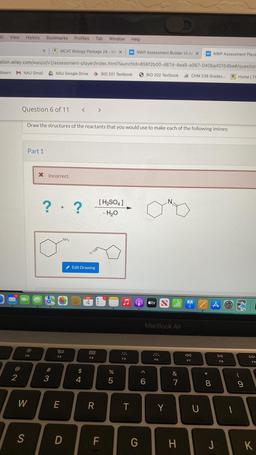