Disorders of the Reproductive System Lesson Posttest Question 7 Points 2 Which is NOT a symptom of endometriosis? Dysuria O Dyse 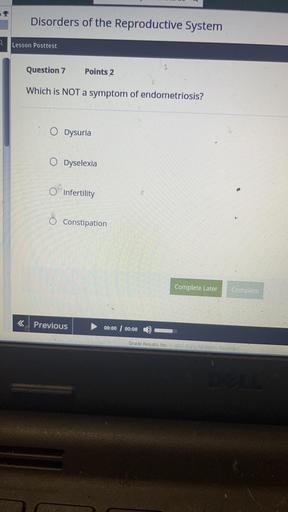 Select the correct answer. Read the following passage, and then answer the question that follows. Hinduism had a strong influence on society during the reign of the Guptas. The Gupta dynasty constructed temples where people could carry out Hindu rituals and traditions. They supported strong Hinduism beliefs. Some beliefs also shaped the structure of families in Gupta society. People lived in multigenerational households where parents, children, and grandparents lived together in the same house. The eldest male was the head of the family, and he made all the important decisions of the household. Occupations were often hereditary, therefore, the children learned the family trade from a very young age. They followed the practice of arranged marriage, which meant parents found partners for their children. What can be concluded from this passage? OA. All members of the family were allowed to make decisions in the Gupta period, OB. The institution of marriage was strong during the Gupta period, OC. Hinduism encouraged people to choose their occupations during the Gupta period, OD Individual choice was severely restricted in Indian society during the Gupta period.