A spherical capacitor is formed from two concentric spherical conducting shells separated by vacuum. The inner sphere has radius 10.0 centimeters, and the separation between the spheres is 1.50 centim 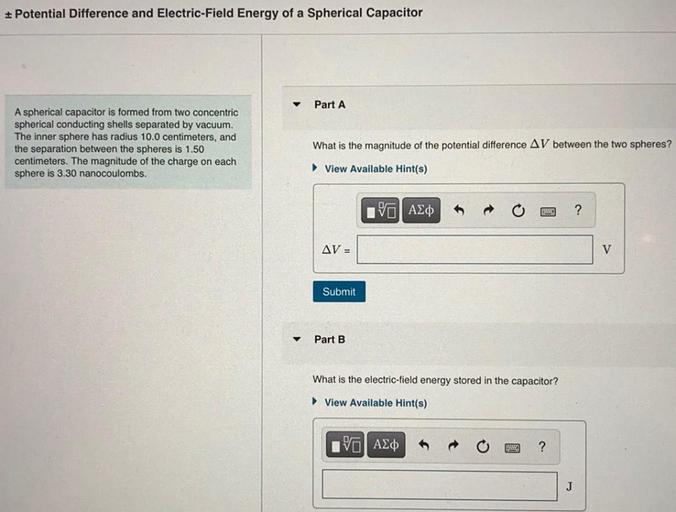 A spherical capacitor is formed from two concentric spherical conducting shells separated by vacuum. The inner sphere has radius 10.0 centimeters, and the separation between the spheres is 1.50 centimeters. The magnitude of the charge on each sphere is 3.30 nanocoulombs. a)What is the magnitude of the potential difference ΔV between the two spheres? b)What is the electric-field energy stored in the capacitor? 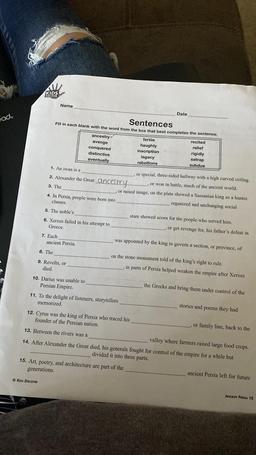 KIDS DISCOVER Name Date eado Sentences Fill in each blank with the word from the box that best completes the sentence. ancestry avenge conquered distinctive eventually fertile haughty inscription legacy rebellions recited relief rigidly satrap subdue 1. An iwan is a 2. Alexander the Great_ancestry 3. The or special, three-sided hallway with a high curved ceiling. or won in battle, much of the ancient world. or raised image, on the plate showed a Sassanian king as a hunter. organized and unchanging social 4. In Persia, people were born into classes. 5. The noble's stare showed scorn for the people who served him. 6. Xerxes failed in his attempt to Greece. or get revenge for, his father's defeat in 7. Each ancient Persia was appointed by the king to govern a section, or province, of 8. The 9. Revolts, or died. on the stone monument told of the king's right to rule. in parts of Persia helped weaken the empire after Xerxes 10. Darius was unable to Persian Empire. the Greeks and bring them under control of the 11. To the delight of listeners, storytellers memorized stories and poems they had 12. Cyrus was the king of Persia who traced his founder of the Persian nation, or family line, back to the 13. Between the rivers was a valley where farmers raised large food crops. 14. After Alexander the Great died, his generals fought for control of the empire for a while but divided it into three parts. 15. Art, poetry, and architecture are part of the generations. ancient Persia left for future Kids DISCOVER ANCIENT PERSIA 12