Question #5 of 95 During which risk management process would a project manager decide to transfer a risk? O A) Plan risk respons 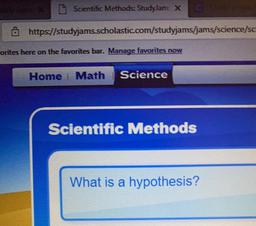 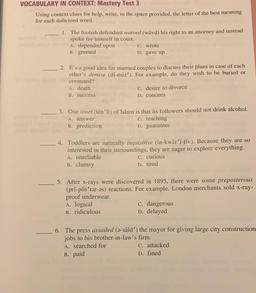 VOCABULARY IN CONTEXT: Mastery Test 3 Using context clues for help, write, in the space provided, the letter of the best meaning for each italicized word. 1. The foolish defendant waived (wāvd) his right to an attorney and instead spoke for himself in court. A. depended upon C. wrote B. greeted D. gave up 2. It's a good idea for married couples to discuss their plans in case of each other's demise (di-miz'). For example, do they wish to be buried or cremated? A. death C. desire to divorce B. success D. concern 3. One tenet (tën'it) of Islam is that its followers should not drink alcohol. A. answer c. teaching B. prediction D. guarantee 4. Toddlers are naturally inquisitive (în-kwiz'i-tív). Because they are so interested in their surroundings, they are eager to explore everything. A. unreliable C. curious B. clumsy D. tired 5. After X-rays were discovered in 1895, there were some preposterous (pri-põs'tər-əs) reactions. For example, London merchants sold x-ray- proof underwear. A. logical c. dangerous B. ridiculous D. delayed 6. The press assailed (ə-sāld') the mayor for giving large city construction jobs to his brother-in-law's firm. A. searched for C. attacked B. paid D. fined

Reasoning The robot makes decisions on where to move next with the obstacle sensor. If an obstruction is presented it will back up and turn in a new direction. If there is no object detected the robot will continue moving straight. Knowledge Representation The robot collects information about the environment by using the obstacle sensor. When it moves about the area, it will either detect or not detect an obstacle. It will not retain a map of the room.