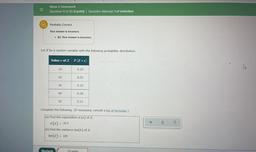 A multiple-choice test consists of 8 questions. Each question has answer choices of a, b, c, d, and e, and only one of the choices is correct. If a student randomly guesses on each question, what is the probability that he gets at least 2 of them correct? Carry your intermediate computations to at least four decimal places, and round your answer to two decimal places. (If necessary, consult a list of formulas.)

A psychologist has designed a questionnaire to measure individuals' aggressiveness. Suppose that the scores on the questionnaire are normally distributed with a standard deviation of 100. Suppose also that exactly 15% of the scores exceed 750. Find the mean of the distribution of scores. Carry your intermediate computations to at least four decimal places. Round your answer to at least one decimal place.

Suppose that 48% of the population of U.S. voters favors a particular presidential candidate. If a random sample of 75 voters is chosen, approximate the probability that at least 34 favor this candidate. Use the normal approximation to the binomial with a correction for continuity. Round your answer to at least three decimal places. Do not round any intermediate steps. (If necessary, consult a list of formulas.)

Empirical research on stock market data indicates that over the course of a year, 50% of stocks go up. A random sample of 400 stocks is going to be chosen at the beginning of next year. Let p be the proportion of the stocks in the sample that go up over the course of a year. (a) Find the mean of p. (b) Find the standard deviation of p. (c) Compute an approximation for P (P >0.52), which is the probability that more than 52% of the stocks in the sample

Suppose that we've decided to test Clara, who works at the Psychic Center, to see if she really has psychic abilities. While talking to her on the phone, we'll thoroughly shuffle a standard deck of 52 cards (which is made up of 13 hearts, 13 spades, 13 diamonds, and 13 clubs) and draw one card at random. We'll ask Clara to name the suit (heart, spade, diamond, or club) of the card we drew. After getting her guess, we'll return the card to the deck, thoroughly shuffle the deck, draw another card, and get her guess for the suit of this second card. We'll repeat this process until we've drawn a total of 18 cards and gotten her suit guesses for each. Assume that Clara is not clairvoyant, that is, assume that she randomly guesses on each card. Answer the following. (a) Estimate the number of cards in the sample for which Clara correctly guesses the suit by giving the mean of the relevant distribution (that is, the expectation of the relevant random variable). Do not round your response. (b) Quantify the uncertainty of your estimate by giving the standard deviation of the distribution. Round your response to at least three decimal places.

The mean starting salary offered to graduating students with a certain major in a recent year was $64,260, with a standard deviation of $3643. A random sample of 75 of that year's graduating students with the major has been selected. What is the probability that the mean starting salary offered to these 75 students was $64,500 or more? Carry your intermediate computations to at least four decimal places. Round your answer to at least three decimal places.