General Lab Safety PRE-LAB QUESTIONS 1. What should you always wear to protect your eyes when you are in a laboratory? 2. Should

General Lab Safety PRE-LAB QUESTIONS 1. What should you always wear to protect your eyes when you are in a laboratory? 2. Should you add acid to water or water to acid? 3. Where should you dispose of broken glass? 4. What should you do if you spill a chemical on your hand?

More Questions on The Living World 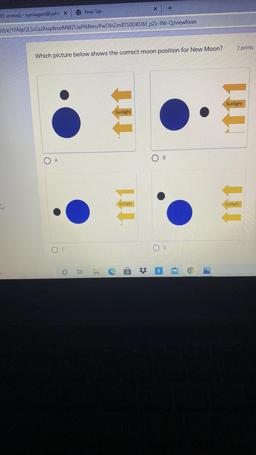 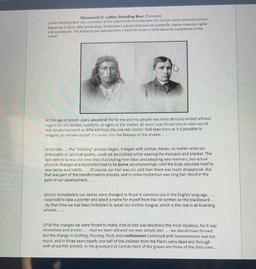 Document D: Luther Standing Bear (Excerpt) Luther Standing Bear was a member of the Lakota tribe and attended the Carlisle Indian Industrial School beginning in 1879. After graduating, he became a Lokota chief and advocated for Native American rights and sovereignty. The following are excerpts from c book he wrote in 1913 about his experiences at the school At the age of eleven years, ancestral life for me and my people was most abruptly ended without regard for our wishes, comforts, or rights in the matter. At once I was thrust into an alien world, into an environment as different from the one into which I had been born as it is possible to imagine, to remake mysell, if I could, into the likeness of the invader.... At Carlisle ... the "civilizing process began. It began with clothes. Never, no matter what our philosophy or spiritual quality, could we be civilized while wearing the moccasin and blanket. The lask before us was not only that of accepting new ideas and adopting new manners, but actual physical changes and discomfort had to be borne uncomplainingly until the body adjusted itself to new tastes and habits.... Of course, our hair was cut, and then there was much disapproval. But that was part of the transformation process, and in some mysterious way long hair stood in the path of our development... Almost immediately our names were changed to those in common use in the English language.... I was told to take a pointer and select a name for myself from the list written on the blackboard... . By that time we had been forbidden to speak our mother tongue, which is the rule in all boarding schools.... of all the changes we were forced to make, that of diet was doubtless the most injurious, for it was immediate and drastic.... Had we been allowed our own simple diet... we should have thrived. But the change in clothing, housing, food, and confinement combined with lonesomeness was too much, and in three years nearly one half of the children from the plains were dead and through with all earthly schools. In the graveyard at Carlisle most of the graves are those of the little ones..