Here are the bones found on Day 2 of the dig. You will notice that the bones uncovered on Day 1 are also on this page. Arrange t 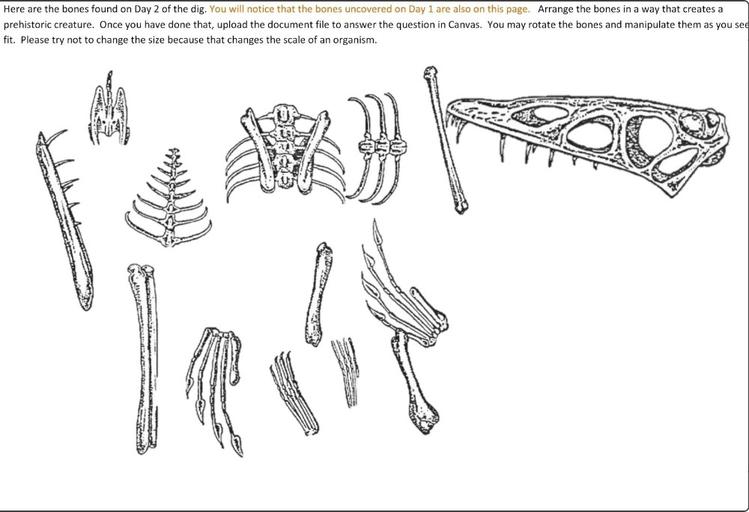 Here are the bones found on Day 2 of the dig. You will notice that the bones uncovered on Day 1 are also on this page. Arrange the bones in a way that creates a prehistoric creature. Once you have done that, upload the document file to answer the question in Canvas. You may rotate the bones and manipulate them as you see fit. Please try not to change the size because that changes the scale of an organism. SCOPO CEYS OTRE FOR

True or false: One of the problems that impaired the success of perestroika was the Soviet Union's lack of ethnic diversity, which acted to exaggerate calls by Russian nationalists to abandon official protection of ethnic minorities. False O True 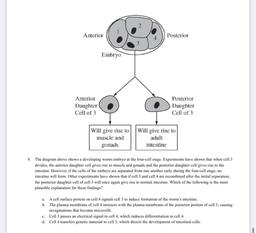 2 Anterior Posterior 3 Embryo Anterior Daughter Cell of 3 Posterior Daughter Cell of 3 Will give rise to muscle and gonads Will give rise to adult intestine 8. The diagram above shows a developing worm embryo at the four-cell stage. Experiments have shown that when cell 3 divides, the anterior daughter cell gives rise to muscle and gonads and the posterior daughter cell gives rise to the intestine. However, if the cells of the embryo are separated from one another early during the four-cell stage, no intestine will form. Other experiments have shown that if cell 3 and cell 4 are recombined after the initial separation, the posterior daughter cell of cell 3 will once again give rise to normal intestine. Which of the following is the most plausible explanation for these findings? a. A cell surface protein on cell 4 signals cell 3 to induce formation of the worm's intestine. b. The plasma membrane of cell 4 interacts with the plasma membrane of the posterior portion of cell 3, causing invaginations that become microvilli. c. Cell 3 passes an electrical signal to cell 4, which induces differentiation in cell 4. d. Cell 4 transfers genetic material to cell 3, which directs the development of intestinal cells.