19. What are the ways that plants can respond to touch and mechanical stress like wind? How do plants defend themselves against

19. What are the ways that plants can respond to touch and mechanical stress like wind? How do plants defend themselves against predators through physical and chemical means? What hormone is associated with chemical defense?

QUESTION 8 The passive transport of ions across a cellular membrane is influenced by two general forces. These include 1) a chemical force, which gives the ion a tendency to move down its own concentration gradient, and 2) the membrane potential of the cell, which indiscriminately tends to attract positively charged ions into the cell and directs negatively charged ions to the outside. The rate with which ions move through transport proteins will thus depend on the combined result of these two forces. Together, these two forces are known as the lon's a concentration gradient b. electrical charge O electrochemical gradient d electronegativity 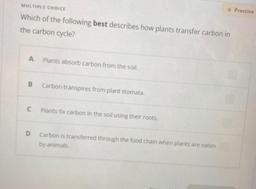 Which of the following best describes how plants transfer carbon in the carbon cycle? A) Plants absorb carbon from the soil. B) Carbon transpires from plant stomata. C) Plants fix carbon in the soil using their roots. D) Carbon is transferred through the food chain when plants are eaten by animals.