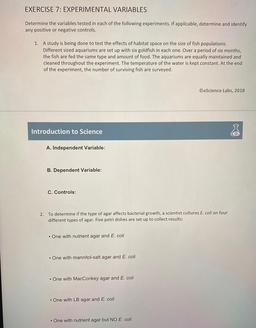 EXERCISE 7: EXPERIMENTAL VARIABLES Determine the variables tested in each of the following experiments. If applicable, determine and identify any positive or negative controls. 1. A study is being done to test the effects of habitat space on the size of fish populations. Different sized aquariums are set up with six goldfish in each one. Over a period of six months, the fish are fed the same type and amount of food. The aquariums are equally maintained and cleaned throughout the experiment. The temperature of the water is kept constant. At the end of the experiment, the number of surviving fish are surveyed. eScience Labs, 2018 Introduction to Science A. Independent Variable: B. Dependent Variable: C. Controls: 2. To determine if the type of agar affects bacterial growth, a scientist cultures E. coli on four different types of agar. Five petri dishes are set up to collect results: • One with nutrient agar and E. coli . One with mannitol-salt agar and E. coli • One with MacConkey agar and E. coli . One with LB agar and E. coli . One with nutrient agar but NO E. coli 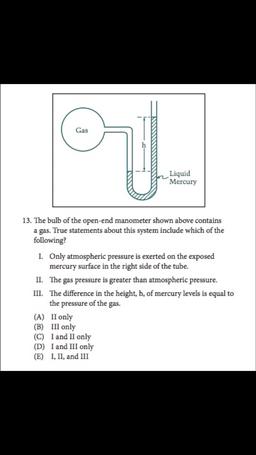 Gas h Liquid Mercury 13. The bulb of the open-end manometer shown above contains a gas. True statements about this system include which of the following? I. Only atmospheric pressure is exerted on the exposed mercury surface in the right side of the tube. II. The gas pressure is greater than atmospheric pressure. III. The difference in the height, h, of mercury levels is equal to the pressure of the gas. (A) II only (B) III only (C) I and II only (D) I and III only (E) I, II, and III

If we did a chemical analysis of the cell walls of the great majority of bacteria, which of the following would we expect to find? a. fructose b. N-acetylmuramic acid O c. unusual amino acids d. lactose O e. b and

Question 40 (2.5 points) One of the best factors to combat heat strain is the evaporation of sweat from the skin. Which one of the following best addresses this point? a) Clothing requirements b) Air movement O c) Humidity d) Radiant heat exchange

Daffodils can reproduce both asexually and sexually. How does a daffodil population benefit from reproducing sexually instead of asexually? It can reproduce more rapidly. It can pass favorable traits to all offspring, It can increase the diversity of inherited traits. It can eliminate unfavorable traits from the gene pool.

troph - feeding 6. Autotrophs obtain their energy in a completely different way. What is this method, and describe two different types of Autotrophs. 7. If we say that an organism is aerobic, what does this mean? What does anaerobic mean?

Odysseyware IF AROMA MESSAGE HELP SIGM OUT SECTION 5 OF 6 QUESTION 6 OF 6 ASSIGNMENTS COURSES Assignment - 6. Cellular Respiration: Anaerobic Phase Attempt 1 OT 100 1 2 3 4 5 6 > >> Yeast has many commercial uses in the production of Select all that apply. Breads Fuels Sodas Wine SUBMIT ANSWER READ NEXT SECTION ASK FOR HELP TURN IT IN 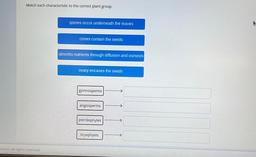