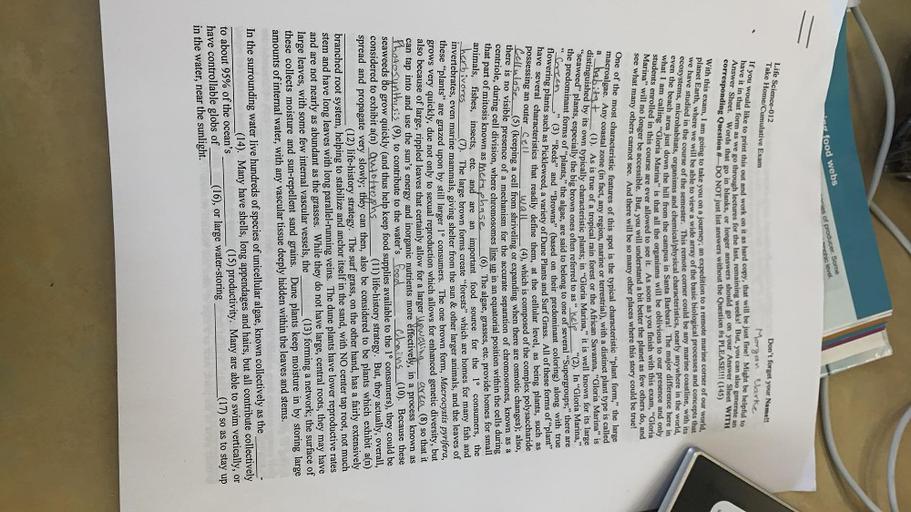 ed food webs les of producer. Some chic level Life Science-012 Take Home/Cumulative Exam students enrolled in this course are ever allowed to see it. As soon as you finish with this exam, "Gloria see what many others cannot see. And there will be so many other places where this story could be true! Green Don't forget your Namell Morgan Clarke hf you would like to print this out and work on it as hard copy, that will be just fine! Might be helpful to hange it in that form as we go through lectures for the last, remaining weeks! But, you can also generate an corresponding Question hat sein ole just list answers without the Question is PLEASE!!! (145) Conswer Sheet. Words that go ine blanks, or longer answers should go on your Answer Sheet WITH PYüthe this exam, I am going to take you on a journey; an expedition to a remote marine corner of our world, planet Earth, where we will be able to view a wide array of the basic biological processes and concepts that evenystems, microhabitats, organisms and chemical physical characteristics, nearly anywhere in the world, what I am calling “Gloria Marina is that all the organisms will be oblivious to our presence and only macrof the most characteristic features of this spot is the typical characteristic “plant form," the large macroalgae. Any coastal zone (in fact, any region, marine or terrestrial), with a distinct plant type is called distinguished by its own typically characteristica plants: Pines Gloria Marina," it is well known for its large -"(2). In “Gloria Marina," the predominant forms of “plants," the algae, are said to belong to one of several “Supergroups;" there are (3) "Reds” and “Browns” (based on their predominant coloring) along with true flowering plants such as Pickleweed, a variety of Dune Plants and Surf Grass. All of these forms of “plant" have several characteristics that readily define them, at the cellular level, as being plants, such as possessing an outer Cell thellulose (5) (keeping a cell from shriveling or expanding when there are osmotic changes); also, there is no visible presence of a mechanism for the accurate separation of chromosomes, known as a centriole, during cell division, where chromosomes line up in an equatorial position within the cells during that part of mitosis known as metaphase (6). The algae, grasses, etc. provide homes for small animals, fishes, insects, etc. and are an important food source for the 1° consumers, the herbivores (7). The large brown forms create “forests” which are homes for many fish and invertebrates, even marine mammals, giving shelter from the sun & other larger animals, and the leaves of these “plants” are grazed upon by still larger 1° consumers. The one brown form, Macrocystis pyrifera, grows very quickly, due not only to sexual reproduction which allows for enhanced genetic diversity, but also because of large, rippled leaves that certainly allow for a larger upwelling area (8) so that it can tap into and use the sun's energy and inorganic nutrients more effectively, in a process known as Photosynthesis (9), to contribute to the water's food Chains (10). Because these seaweeds do grow quickly (and thus help keep food supplies available to the 1° consumers), they could be considered to exhibit a(n) autotrophs (11) life-history strategy. But, they actually, overall, spread and propagate very slowly; they can then, also be considered to be plants which exhibit a(n) (12) life-history strategy. The surf grass, on the other hand, has a fairly extensively branched root system, helping to stabilize and anchor itself in the sand, with NO center tap root, not much stem and have long leaves with long parallel-running veins. The dune plants have lower reproductive rates and are not nearly as abundant as the grasses. While they do not have large, central roots, they may have large leaves, with some few internal vascular vessels, the (13) forming a network; the surface of these collects moisture and sun-repellent sand grains. Dune plants keep moisture in by storing large amounts of internal water, with any vascular tissue deeply hidden within the leaves and stems. In the surrounding water live hundreds of species of unicellular algae, known collectively as the _(14). Many have shells, long appendages and hairs, but all contribute collectively to about 95% of the ocean's (15) productivity. Many are able to swim vertically, or have controllable globs of (16), or large water-storing (17) so as to stay up in the water, near the sunlight.

2. Determining Molar Volume of Hydrogen Gas a. Magnesium reacts with an excess of hydrochloric acid (HCl) to produce hydrogen: Show the complete chemical Equation that produced the hydrogen b. One mole of Mg is expected to produce one mole of hydrogen. The volume occupied by the hydrogen gas is called, what? c. Because the hydrogen was collected over water, it is said to be "wet." Why? d. The total pressure of a gas mixture is equal to the sum of the partial pressures of each gas, in this case, hydrogen and water vapor. Show the formula e. The pressure and volume relationships for this experiment are expressed by, what?

Read the following lines taken from "The Silver Mine" written by Selma Lagerlof, and answer the question that follows: "He was just as happy in the thought of becoming wealthy as any of the others were. He mused upon how he would repair the parsonage that now was no better than a cottage; and how he could marry the daughter of the bishop, as he had long desired" The given excerpt is an example of which of the following options? O Use of action O Inner conflict O The logical flow of ideas O Use of anecdote

Identify the denotation of the boldfaced word using context clues. If you go to the party wearing your best smile, laugh good naturally, and try your dance steps out (even if you aren't the best dancer), you will attract attention with your amiable disposition. O Impressive O Appealing O Pleasant