QUESTION 3 Hypothalamus A Anterior Pituitary D 1 B C Cortisol The following options relate to the diagram above. Use them to ans 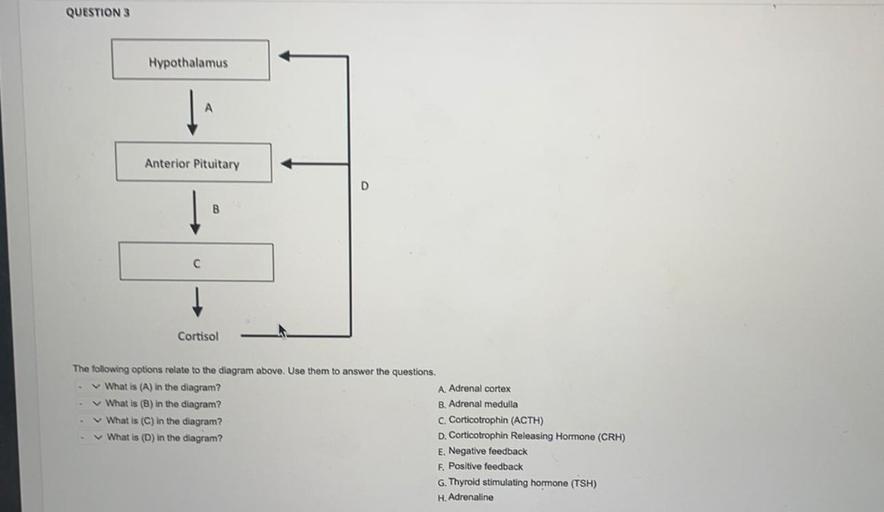 Question 17 (1 point) Listen The best definintion for a tropic hormone is one that: O a) is activated when the environment reaches a temperature higher than the body temperature. b) is secreted out of the body (i.e. the skin, or into the gut). c) modulates the perception of temperature in vertebrates. d) has as a target an endocrine gland.

The basal ganglia, rellexes The basal ganglia, motor inhibition 1 pts Question 12 feeding behavior. The PVN would normally function to Lesioning (damaging) the PVN in the hypothalamus has the effect of the Stimulating; inhibit; lateral nucleus Inhibiting; inhibit; arcuate nucleus C Inhibiting; excite; lateral nucleus Stimulating; inhibit; arcuate nucleus 1 pts Question 13 before reaching the cortex, except for Sensory information for all of the major senses is relayed through the

Home ScienceNews for Students sleep a night, for three nights in a row. To stay awake, the volunteers were asked to do things such as walk, play video games, watch TV, sit on an exercise ball or play ping-pong. Throughout the experiment, one of the sleep-deprived groups got a nutritional drink with extra protein and vitamins. The other group got a placebo drink: It looked and tasted the same but had no extra nutrition. Sleep Helps Wounds Heal Faster ILIMA LOOMIS APR 2, 2018 – 7:07 AM EST Sleep clearly helped. People who slept normally healed in about 4.2 days. The sleep- deprived volunteers took about 5 days to heal. And getting better nutrition offered no clear benefit. Scientists sampled fluid from the wounds The group that drank the nutritional supplement did show a stronger immune response at the wound. But that didn't speed the healing, Smith reports in the January Journal of Applied Physiology. 11012 Glee PATA What to make of the data Sleep expert Clete Kushida didn't find the results all that surprising. He is a neurologist at Stanford University Medical Center in California. The idea that lost sleep harms the immune system - and healing "makes total sense," he says. Yet studies that have tried to test this in people and animals showed mixed results. A good night's sleep can improve your mood, help you stay alert and boost your memory. Now data show that getting enough Z's might also get your cuts to heal more promptly. In fact, sleep was more important than good nutrition in speeding wound healing. This wasn't what scientists had expected to see. They had hoped to show that giving people a nutritional boost would make their skin wounds heal faster — even in people who were sleep- deprived. That would have been useful for soldiers in combat, or for doctors working long shifts in a hospital. The scientists thought it should work because good nutrition keeps the body's immune system strong. That immune system helps repair injuries and guards against infection. Why didn't nutrition help healing time? Smith can think of a few possibilities. The healthy drinks may have helped a little - just not enough to show up clearly in the relatively small numbers of men and women tested here. There was also a big difference in healing time between individual participants, which could have made it harder to see a small effect due to nutrition. For people who can't avoid lost sleep, scientists still don't have a nutritional way to help them heal, Smith says. If you want to heal faster, your best bet for now is to get more "Vitamin Z. = Sleep Tracey Smith is a nutrition scientist at the U.S. Army Research Institute of Environmental Medicine, in Natick, Mass. She and her team studied three groups of healthy people who came to their laba tory to take part in tests. They gave each recruit small skin wounds. Applying gentle suction on their forearms, they created blisters. Then they removed the tops of these blisters. (The procedure doesn't hurt, although it can be itchy, Smith says.) 72 I ESL 145 One group of 16 volunteers got a normal amount of sleep - seven to nine hours a night. The other two groups of 20 people each were kept sleep deprived. They got only two hours of 71 FSL 145