ne last... the people must own the railroads, and should the gove managing all railroads, we should favor an amendment to the Co 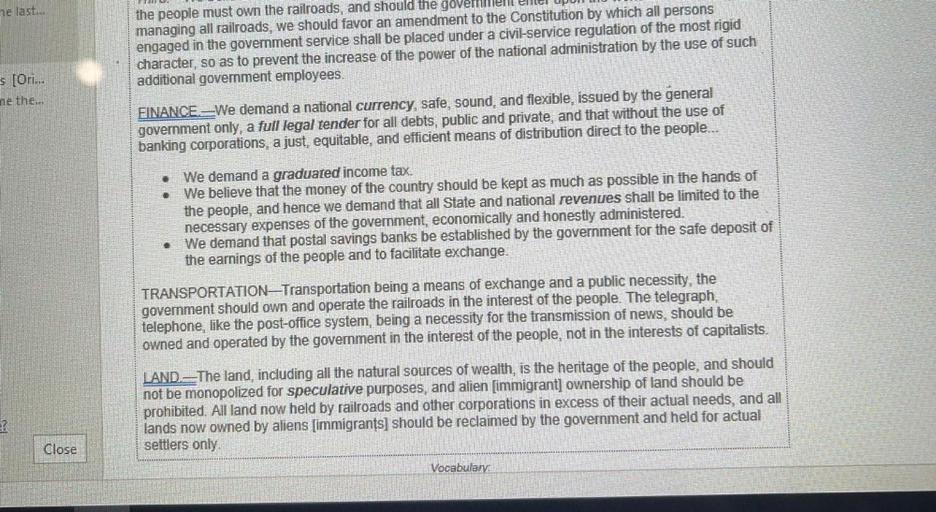 ne last... the people must own the railroads, and should the gove managing all railroads, we should favor an amendment to the Constitution by which all persons engaged in the government service shall be placed under a civil-service regulation of the most rigid character, so as to prevent the increase of the power of the national administration by the use of such additional government employees. s [Ori... ne the... FINANCE. We demand a national currency, safe, sound, and flexible, issued by the general government only, a full legal tender for all debts, public and private, and that without the use of banking corporations, a just, equitable, and efficient means of distribution direct to the people... . We demand a graduated income tax. We believe that the money of the country should be kept as much as possible in the hands of the people, and hence we demand that all State and national revenues shall be limited to the necessary expenses of the government, economically and honestly administered. We demand that postal savings banks be established by the government for the safe deposit of the earnings of the people and to facilitate exchange. . TRANSPORTATION—Transportation being a means of exchange and a public necessity, the government should own and operate the railroads in the interest of the people. The telegraph, telephone, like the post-office system, being a necessity for the transmission of news, should be owned and operated by the government in the interest of the people, not in the interests of capitalists. LAND-The land, including all the natural sources of wealth, is the heritage of the people, and should not be monopolized for speculative purposes, and alien (immigrant] ownership of land should be prohibited. All land now held by railroads and other corporations in excess of their actual needs, and all lands now owned by aliens (immigrants) should be reclaimed by the government and held for actual settlers only. Close Vocabulary 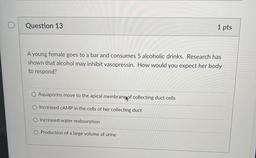 Question 13 1 pts A young female goes to a bar and consumes 5 alcoholic drinks. Research has shown that alcohol may inhibit vasopressin. How would you expect her body to respond? Aquaporins move to the apical membranepof collecting duct cells O Increased CAMP in the cells of her collecting duct O Increased water reabsorption O Production of a large volume of urine