Most common cause of necrotizing infection of skeletal muscle. Also causes gas gangrene, gastroenteritis and necrotizing enteritis. It is usually transmitted by tissue injury being contaminated with spores. A) Clostridium perfringens B) Bacteroides species C) Clostridium tetani D) Clostridium botulinum 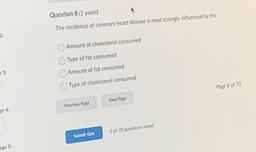 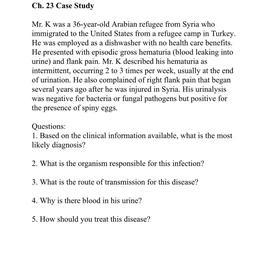 Ch. 23 Case Study Mr. K was a 36-year-old Arabian refugee from Syria who immigrated to the United States from a refugee camp in Turkey. He was employed as a dishwasher with no health care benefits. He presented with episodic gross hematuria (blood leaking into urine) and flank pain. Mr. K described his hematuria as intermittent, occurring 2 to 3 times per week, usually at the end of urination. He also complained of right flank pain that began several years ago after he was injured in Syria. His urinalysis was negative for bacteria or fungal pathogens but positive for the presence of spiny eggs. Questions: 1. Based on the clinical information available, what is the most likely diagnosis? 2. What is the organism responsible for this infection? 3. What is the route of transmission for this disease? 4. Why is there blood in his urine? 5. How should you treat this disease? 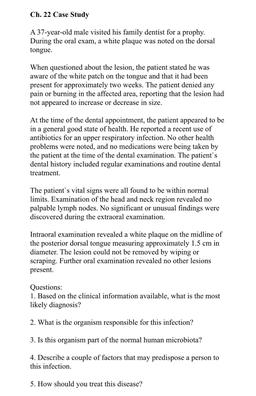 Ch. 22 Case Study A 37-year-old male visited his family dentist for a prophy. During the oral exam, a white plaque was noted on the dorsal tongue. When questioned about the lesion, the patient stated he was aware of the white patch on the tongue and that it had been present for approximately two weeks. The patient denied any pain or burning in the affected area, reporting that the lesion had not appeared to increase or decrease in size. At the time of the dental appointment, the patient appeared to be in a general good state of health. He reported a recent use of antibiotics for an upper respiratory infection. No other health problems were noted, and no medications were being taken by the patient at the time of the dental examination. The patient's dental history included regular examinations and routine dental treatment. The patient's vital signs were all found to be within normal limits. Examination of the head and neck region revealed no palpable lymph nodes. No significant or unusual findings were discovered during the extraoral examination. Intraoral examination revealed a white plaque on the midline of the posterior dorsal tongue measuring approximately 1.5 cm in diameter. The lesion could not be removed by wiping or scraping. Further oral examination revealed no other lesions present. Questions: 1. Based on the clinical information available, what is the most likely diagnosis? 2. What is the organism responsible for this infection? 3. Is this organism part of the normal human microbiota? 4. Describe a couple of factors that may predispose a person to this infection. 5. How should you treat this disease?

During Ames test, we use his- strains and identify his- to his+ mutants using their newly acquired ability to grow in the absence of histidine. Instead, your friend made a mistake and used a his+ strain to create his+ to his-mutants. Which of the following describes the results that your friend would obtain? a. Only his-mutants created by your friend will grow on plates. b. Only control plates will have bacterial growth. Oc. There will be no growth on any of the plates. d. All plates will have a lot of bacterial growth because all original his+ cells will grow since they can synthesize their own histidine.

Tlymphocytes may be inactivated by binding of programmed death 1 (PD1) protein on the T cell to PD1 ligand (PD1L) on macrophages. This is one mechanism of which of the following regulatory immune processes? O a T cell negative selection b. T cell central tolerance OC. T cell peripheral tolerance Od T cell memory generation

Which of the following steps occurs in the sensitization phase of a type IV hypersensitivity reaction? a Fibrin is deposited and edema leads to induration O b. IgE binds to Fc receptors on mast cells C. Area is infiltrated by T cells and macrophages 12 hours after exposure d. Memory cells are made e. Inflammatory cells accumulate 4 hours after exposure 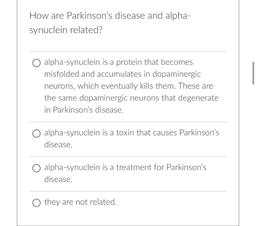 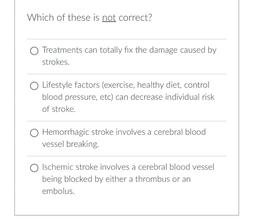 Which of these is not correct? O Treatments can totally fix the damage caused by strokes. O Lifestyle factors (exercise, healthy diet, control blood pressure, etc) can decrease individual risk of stroke. O Hemorrhagic stroke involves a cerebral blood vessel breaking Ischemic stroke involves a cerebral blood vessel being blocked by either a thrombus or an embolus.