Question 1 The Hardy-Weinberg equation states Not yet answered p2 + 2pq + 2 = 1.0 Which of the following does 2pg represent? Poi

Question 1 The Hardy-Weinberg equation states Not yet answered p2 + 2pq + 2 = 1.0 Which of the following does 2pg represent? Points out of 1.00 Flag question a. bb homozygous recessive O b. BB homozygous dominant O none of the options are correct Od Bb heterozygous 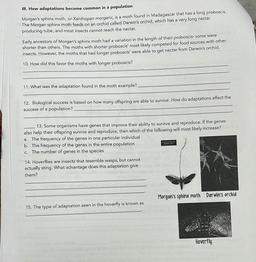 III. How adaptations become common in a population Morgan's sphinx moth, or Xanthopan morganii, is a moth found in Madagascar that has a long proboscis. The Morgan sphinx moth feeds on an orchid called Darwin's orchid, which has a very long nectar producing tube, and most insects cannot reach the nectar. Early ancestors of Morgan's sphinx moth had a variation in the length of their proboscis- some were shorter than others. The moths with shorter proboscis' most likely competed for food sources with other insects. However, the moths that had longer proboscis' were able to get nectar from Darwin's orchid. 10. How did this favor the moths with longer proboscis? 11. What was the adaptation found in the moth example? 12. Biological success is based on how many offspring are able to survive. How do adaptations affect the success of a population? EM 13. Some organisms have genes that improve their ability to survive and reproduce. If the genes also help their offspring survive and reproduce, then which of the following will most likely increase? a. The frequency of the genes in one particular individual b. The frequency of the genes in the entire population C. The number of genes in the species 14. Hoverflies are insects that resemble wasps, but cannot actually sting. What advantage does this adaptation give them? Morgan's sphinx moth Darwin's orchid 15. The type of adaptation seen in the hoverfly is known as Hoverfly 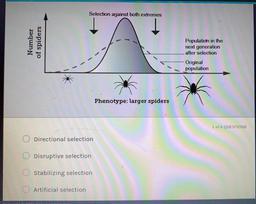