EVEN BloInteractive.org The Making of the Fittest: Natural Selection and Adaptation QUIZ STUDENT HANDOUT 10. Suppose you are stu 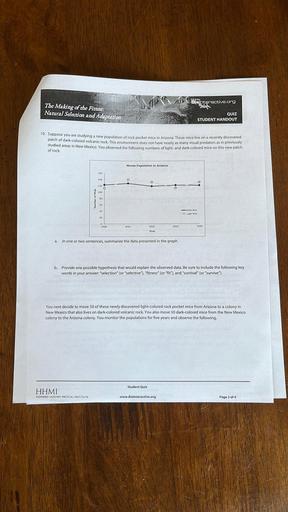 EVEN BloInteractive.org The Making of the Fittest: Natural Selection and Adaptation QUIZ STUDENT HANDOUT 10. Suppose you are studying a new population of rock pocket mice in Arizona, These mice live on a recently discovered patch of dark-colored volcanic rock. This environment does not have nearly as many visual predators as in previously studied areas in New Mexico. You observed the following numbers of light and dark-colored mice on this new patch of rock. Mouse Population in Arizona 160 140 120 100 Number of Mice 80 60 40 Dark Mice Ought Mice 20 0 2000 2001 2002 2003 2004 Year a. In one or two sentences, summarize the data presented in the graph. b. Provide one possible hypothesis that would explain the observed data. Be sure to include the following key words in your answer: "selection" (or "selective"), "fitness" (or "fit"), and "survival" (or "survive"). You next decide to move 50 of these newly discovered light-colored rock pocket mice from Arizona to a colony in New Mexico that also lives on dark-colored volcanic rock. You also move 50 dark-colored mice from the New Mexico colony to the Arizona colony. You monitor the populations for five years and observe the following. Student Quiz HHMI HOWARD HUGHES MEDICAL INSTITUTE www.Biolnteractive.org Page 3 of 4

Anatomical structures that appear to be derived from a functional structure in an ancestor, but that currently do not serve an important function, are called O a b mutated. fossilized. vestigial. O C 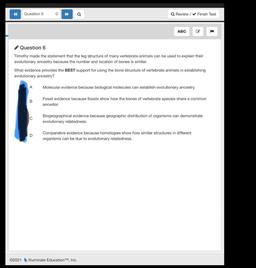