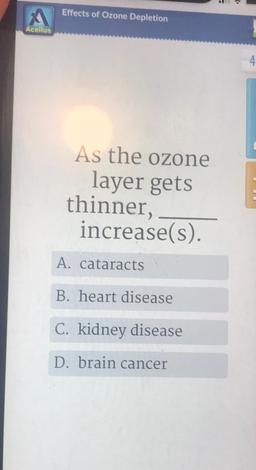 A biologist observes that a species of stick insects on a remote island has three different color traits, almost equally distributed among the population. One phenotype is dark green, a second is light green, and a third is light green with dark green stripes. Over a decade, the biologist observes that the dark green phenotype becomes the most abundant, making up nearly 70% of the population. Which statement is the best explanation for this phenomenon? A. None of the color characteristics are undergoing selection at the present time. B. A founder effect has resulted in an increase in the numbers of the dark green phenotype. C. The dark green phenotype benefits the insects' survival, making them more likely to reproduce. D. The insects with the dark green color trait have developed an r-selection strategy for survival.

2 Up: 75 days Tue 90AM x clever - Bing C Clever | Portal e Environmental Impacts on Evol x + https://f2.app.edmentum.com/assessments-delivery/ua/mt/launch/49073344/45383285/aHROCHM6Ly9mMihhcHAUZWRtZW5odWouY29tL2xlYXJUZX... to Office365 Canvas ( Skyward bhoney cake pictur... New folder New folder s W Other Favorit 3 Next Environmental Impacts on Evolution: Mastery Te Submit Test Tools 3 Select ALL the correct answers. Some individuals of a particular species of sea bird underwent a genetic mutation that resulted in larger beaks. The larger size of beaks helped these birds to break open clams and other mollusks for food. It also helped them defend themselves against predators. After many generations, almost all of the birds in the population had big beaks. For which two reasons did this phenomenon occur? natural selection mechanical isolation prezygotic barriers to reproduction high genetic variation in the species Reset Next 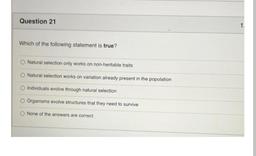 Consider the process of protein synthesis and the fact that the receptor proteins in the dark brown and light brown mice function differently. Make a prediction about what causes this difference in function. Write your prediction(s) here and then return to the Driving Question Board to share with the class. 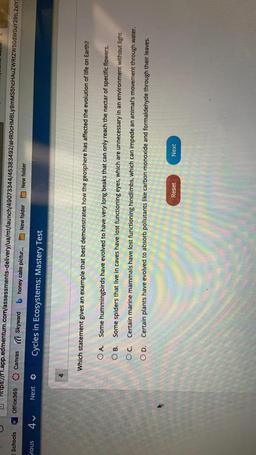 Which statement gives an example that best demonstrates how the geosphere has affected the evolution of life on Earth? A) Some hummingbirds have evolved to have very long beaks that can only reach the nectar of specific flowers. B) Some spiders that live in caves have lost functioning eyes, which are unnecessary in an environment without light. C) Certain marine mammals have lost functioning hindlimbs, which can impede an animal's movement through water. D) Certain plants have evolved to absorb pollutants like carbon monoxide and formaldehyde through their leaves.

Question 1 The Hardy-Weinberg equation states Not yet answered p2 + 2pq + 2 = 1.0 Which of the following does 2pg represent? Points out of 1.00 Flag question a. bb homozygous recessive O b. BB homozygous dominant O none of the options are correct Od Bb heterozygous

In a long-term study of a population of gray squirrels, researchers observed that most of the squirrels had gray fur. However, there were some individuals in the population with white fur (albino). Genetic analysis revealed that the albino condition is expressed by individuals who are homozygous recessive (gg). Over a ten-year period, the average frequency of albino squirrels in the population was 0.18. If the population is assumed to be in Hardy-Weinberg equilibrium, the average frequency of the dominant allele is closest to which of the following? A. 0.42 B. 0.50 C. 0.58 D. 0.75 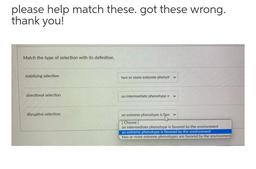 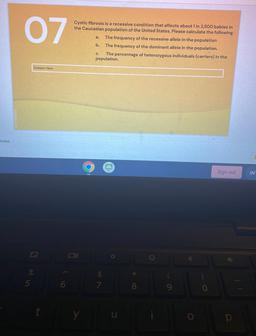