Worksheet question 6. Which of the following would likely characterize an invasive species? A) Offspring do not disperse far fro

Worksheet question 6. Which of the following would likely characterize an invasive species? A) Offspring do not disperse far from parents. B) Produces few offspring at a time. C) Slow life cycle and/or growth. D) Its major predators are endemic to its native habitat. E) Flourishes only if living in a specific, narrow set of environmental conditions. 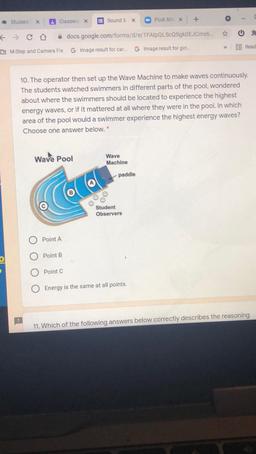 Student X Classwo X E Sound & X + Post Att X docs.google.com/forms/d/e/1FAIpQLSCQSOKOEJCms... DM Step and Camera Fix E Read G Image result for car... G Image result for girl.. 10. The operator then set up the Wave Machine to make waves continuously. The students watched swimmers in different parts of the pool, wondered about where the swimmers should be located to experience the highest energy waves, or if it mattered at all where they were in the pool. In which area of the pool would a swimmer experience the highest energy waves? Choose one answer below. * Wave Pool Wave Machine paddle Student Observers Point A O O Point B Point C o Energy is the same at all points. 11. Which of the following answers below correctly describes the reasoning 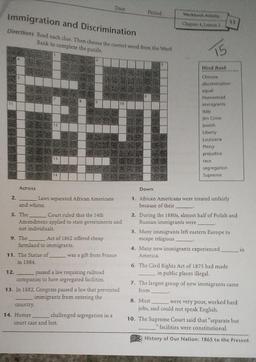 Date Period Immigration and Discrimination Directions Read each due. Then choose the correct word from the Word Bank to complete the puzzle. Workbook Activity Chapter 4 Leon 2 13 15 Word Bank Chinese discrimination equal Homestead immigrants Italy Jim Crow Jewish Liberty Lousiana Plesty prejudice race segregation Supreme Across Down 1. African Americans were treated unfairly because of their 2. Laws separated African Americans and whites. 5. The Court ruled that the 14th Amendment applied to state governments and pot individuals. 9. The Act of 1862 offered cheap farmland to immigrants. 11. The Statue of was a gift from France in 1884 12 passed a law requiring railroad companies to have segregated facilities. 13. In 1882, Congress passed a law that prevented immigrants from entering the country 14. Homer challenged segregation in a court case and lost. 2. During the 1880s, almost half of Polish and Russian immigrants were 3. Many immigrants left eastern Europe to escape religious 4. Many new immigrants experienced in America 6. The Civil Rights Act of 1875 had made in public places illegal. 7. The largest group of new immigrants came from 8. Most were very poor, worked hard jobs, and could not speak English. 10. The Supreme Court said that "separate but "facilities were constitutional History of Our Nation: 1865 to the Present

6. Read the following sentence and then define the underlined word. "One problem: In the vermin-ridden 17th century, such blemishes were hardly uncommon. So the witch hunters devised an ingenious solution." What does the word ingenious mean? a. silly b. b. clever c. c. weak d. d. wise