Am - d) Enviromental Activism addueres ... Download the app for the rest 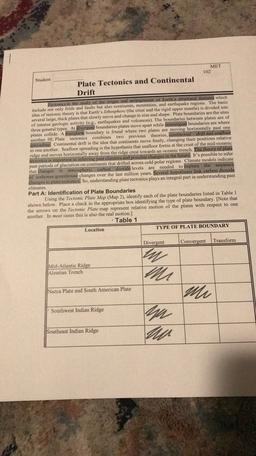 MET 102 Student Plate Tectonics and Continental Drift Tectonics is the study of the origin and arrangement of Earth's structural features which include not only folds and faults but also continents, mountains, and earthquake regions. The basic idea of tectonic theory is that Earth's lithosphere (the crust and the rigid upper mantle) is divided into several large, thick plates that slowly move and change in size and shape. Plate boundaries are the sites of intense geologic activity (e.g., earthquakes and volcanoes). The boundaries between plates are of three general types. At divergent boundaries plates move apart while convergent boundaries are where plates collide. A transform boundary is found where two plates are moving horizontally past one another. 98; Plate tectonics combines two previous theories, continental drift and seafloor spreading. Continental drift is the idea that continents move freely, changing their positions relative to one another. Seafloor spreading is the hypothesis that seafloor forms at the crust of the mid-oceanic ridge and moves horizontally away from the ridge crest towards an oceanic trench. The theory of plate tectonics is important in inferring past climates and possible changes in the future. It's possible to infer past periods of glaciation on continents that drifted across cold polar regions. Climate models indicate that changes in atmospheric carbon dioxide levels are needed to explain the sequence of icehouse/greenhouse changes over the last million years. Several hypothesis link carbon dioxide changes to plate tectonics. So, understanding plate tectonics plays an integral part in understanding past climates. Part A: Identification of Plate Boundaries Using the Tectonic Plate Map (Map 2), identify each of the plate boundaries listed in Table 1 shown below. Place a check in the appropriate box identifying the type of plate boundary. [Note that the arrows on the Tectonic Plate map represent relative motion of the plates with respect to one another. In most cases this is also the real motion.] Table 1 Location TYPE OF PLATE BOUNDARY Divergent Convergent Transform Mid-Atlantic Ridge Aleutian Trench w W Nazca Plate and South American Plate Me Southwest Indian Ridge m Southeast Indian Ridge 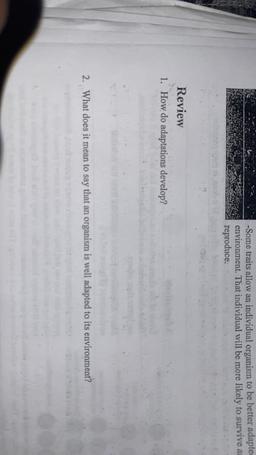 -Some traits allow an individual organism to be better adapter environment. That individual will be more likely to survive a reproduce. Review 1. How do adaptations develop? 2. What does it mean to say that an organism is well adapted to its environment? 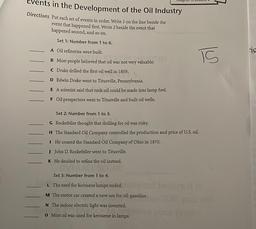 Events in the Development of the Oil Industry Directions Put each set of events in order. Write l on the line beside the event that happened first. Write 2 beside the event that happened second, and so on. Set 1: Number from 1 to 6. A Oil refineries were built. ric IS B Most people believed that oil was not very valuable. C Drake drilled the first oil well in 1859. D Edwin Drake went to Titusville, Pennsylvania. E A scientist said that rock oil could be made into lamp fuel. F Oil prospectors went to Titusville and built oil wells. Set 2: Number from 1 to 5. G Rockefeller thought that drilling for oil was risky. H The Standard Oil Company controlled the production and price of U.S. oil. I He created the Standard Oil Company of Ohio in 1870. J John D. Rockefeller went to Titusville. K He decided to refine the oil instead. VERAT Set 3: Number from 1 to 4. L The need for kerosene lamps ended. M The motor car created a new use for oil: gasoline. N The indoor electric light was invented. O Most oil was used for kerosene in lamps.