Document A: "The Case Against the "Reds" (Modified) In 1917, Russia became a communist country. Also, right after WWI, the count 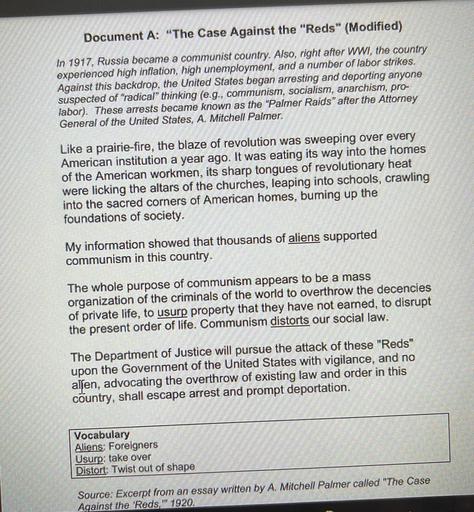 Document A: "The Case Against the "Reds" (Modified) In 1917, Russia became a communist country. Also, right after WWI, the country experienced high inflation, high unemployment, and a number of labor strikes. Against this backdrop, the United States began arresting and deporting anyone suspected of "radical" thinking (e.g., communism, socialism, anarchism, pro- labor). These arrests became known as the "Palmer Raids" after the Attorney General of the United States, A. Mitchell Palmer Like a prairie-fire, the blaze of revolution was sweeping over every American institution a year ago. It was eating its way into the homes of the American workmen, its sharp tongues of revolutionary heat were licking the altars of the churches, leaping into schools, crawling into the sacred corners of American homes, burning up the foundations of society. My information showed that thousands of aliens supported communism in this country. The whole purpose of communism appears to be a mass organization of the criminals of the world to overthrow the decencies of private life, to usurp property that they have not earned, to disrupt the present order of life. Communism distorts our social law. The Department of Justice will pursue the attack of these "Reds" upon the Government of the United States with vigilance, and no alien, advocating the overthrow of existing law and order in this country, shall escape arrest and prompt deportation. Vocabulary Aliens: Foreigners Usurp: take over Distort: Twist out of shape Source: Excerpt from an essay written by A. Mitchell Palmer called "The Case Against the 'Reds" 1920. 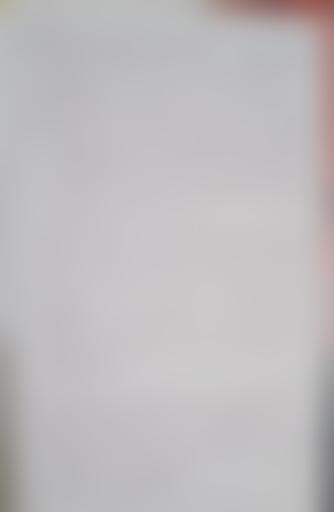 Hi, have 1) Palmer described communism as mass organi- Zation of the criminals of the world to overthrow the decencies of private life. He thinks it dangerous because the foreigners- Cali... Download the app for the rest

2. Perfumes & Bee's Behavior: JoAnna read that certain perfume esters (a type of chemical) would agitate bees. Because perfume formulas are secret, she decided to determine if the unknown agitating ester was present in four different perfumes by observing the bees' behavior. She placed a saucer containing 10 ml of the first perfume 3 meters from the hive. She recorded the time required for the bees to emerge and made observations about their behavior. After giving the bees 30-minute recovery periods between testing, she repeated her procedure with the second, third, and fourth perfumes. All experiments were conducted on the same day when the weather conditions were similar (air, temperature and wind). For this experiment change question 5 to the following 5. This experiment lacks a control group. What should JoAnna do for a control group? 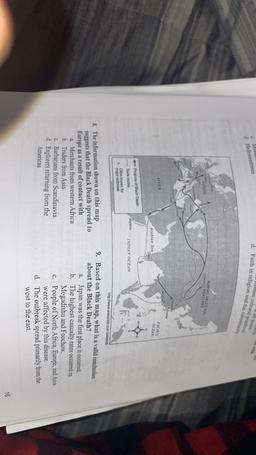 & MORE d Heliocentrism d. Faith in religion and the community nan cultural practices MONGOL ANCESTRAL EUROPE Kom HOMELAND $ AFRICA Pagan PACIFIC OCEAN Arabian Sea INDIAN OCEAN Progress of Black Death Trade routes Cities known for major outbreak http:www.wwnorton.com adapted 8. The information shown on this map suggests that the Black Death spread to Europe as a result of contact with a. Merchants from western Africa b. Traders from Asia C. Barbarians from Scandinavia d. Explorers returning from the Americas 9. Based on this map, what is a valid conclusion about the Black Death? a. Japan was the first place it occurred. b. The highest casualty rates occurred in Mogadishu and Foochow. c. People of North Africa, Europe, and Asia were affected by this disease. d. The outbreak spread primarily from the west to the east. 16

45. How 14. What challenges 46. When people travel to Central American countries, what are some of the most popular have close ties with the United States helped Mexico's economy? tourist attractions to visit?