Biotic components al ülOSAJI Producers übüiol They are the organisms that have the ability to obtain their food without the need for help of other living organisms, by relying on non-living elements. Consumers alsleimal These non-self-feeding organisms may be called heterotrophic organisms. These organisms depend for their food directly or indirectly on the productive organisms, so they are called dependent organisms for nutrition. Decomposers ülbal They are non-autotrophic saprobiontic or parasitic organisms. These organisms cannot devour and digest food, but rather absorb food after secreting digestive enzymes to break down food components into simple substances. 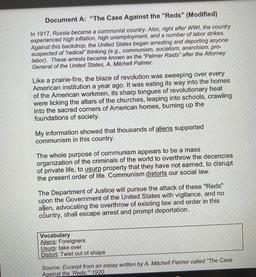 Document A: "The Case Against the "Reds" (Modified) In 1917, Russia became a communist country. Also, right after WWI, the country experienced high inflation, high unemployment, and a number of labor strikes. Against this backdrop, the United States began arresting and deporting anyone suspected of "radical" thinking (e.g., communism, socialism, anarchism, pro- labor). These arrests became known as the "Palmer Raids" after the Attorney General of the United States, A. Mitchell Palmer Like a prairie-fire, the blaze of revolution was sweeping over every American institution a year ago. It was eating its way into the homes of the American workmen, its sharp tongues of revolutionary heat were licking the altars of the churches, leaping into schools, crawling into the sacred corners of American homes, burning up the foundations of society. My information showed that thousands of aliens supported communism in this country. The whole purpose of communism appears to be a mass organization of the criminals of the world to overthrow the decencies of private life, to usurp property that they have not earned, to disrupt the present order of life. Communism distorts our social law. The Department of Justice will pursue the attack of these "Reds" upon the Government of the United States with vigilance, and no alien, advocating the overthrow of existing law and order in this country, shall escape arrest and prompt deportation. Vocabulary Aliens: Foreigners Usurp: take over Distort: Twist out of shape Source: Excerpt from an essay written by A. Mitchell Palmer called "The Case Against the 'Reds" 1920.

EMU Your friend Mike claims, “It isn't cold up in the atmosphere, because hot air rises." Do you agree with Mike's claim? Why or why not? Use evidence you found in the activity. ires claim because it isn't true that 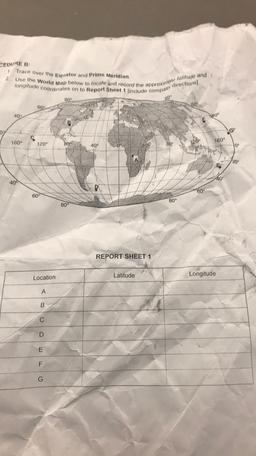 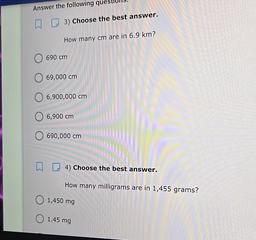 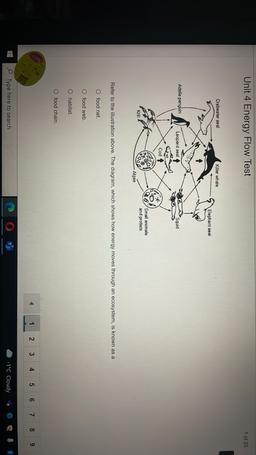 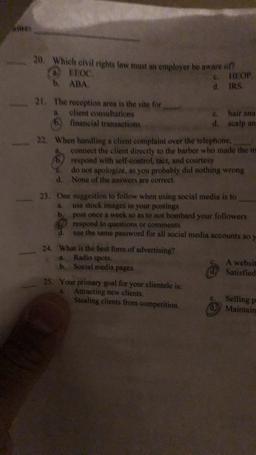 20. Which civil rights law must an employer be aware of a) EOC . b. ABA e TOP d. IRS 21. The reception area is the site for a client consultations financial transactions e hair ana d. scalp an 22. When handling a client complaint over the telephone. connect the client directly to the barber who made them b) respond with self-control, tact, and courtesy do not apologize, as you probably did nothing wrong d. None of the answers are correct. 1 8.0 23. One suggestion to follow when using social media is to use stock images in your postings post once a week so as to not bombard your followers respond to questions or comments use the same password for all social media accounts so y 24. What is the best form of advertising? a Radio spots. A websit b. Social media pages. Satisfied 25. Your primary goal for your clientele is: Attracting new clients, Selling p Stealing clients from competition. d. Maintain 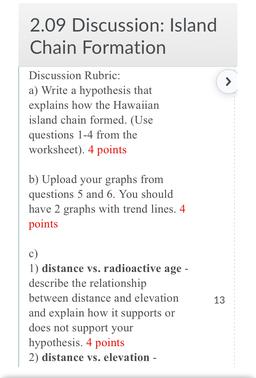 2.09 Discussion: Island Chain Formation > Discussion Rubric: a) Write a hypothesis that explains how the Hawaiian island chain formed. (Use questions 1-4 from the worksheet). 4 points b) Upload your graphs from questions 5 and 6. You should have 2 graphs with trend lines. 4 points 13 c) 1) distance vs. radioactive age - describe the relationship between distance and elevation and explain how it supports or does not support your hypothesis. 4 points 2) distance vs. elevation -