A temperate deciduous forest is dominated by oak trees, which produce acorns. Populations of deer, black bear, and squirrels all rely on the acorns as a primary source of food. A large portion of the forest is cut down, causing it to lose most of its oak trees. What is most likely to happen in the forest as a result? A) Deer would become less likely to survive and reproduce, so their population would decline. B) Black bears, deer, and squirrels would undergo a mass extinction, so the forest's biodiversity would decrease. C) Squirrels would instantly adapt to the lack of acorns, so their population would remain stable. D) Black bears would benefit from the space made available by the loss of trees, so their population would increase.

True or false. If you could genetically modify honeybees such that they would express higher levels of juvenile hormone langer, this would result in a shorter lifespan of the typical bee A) True B) False 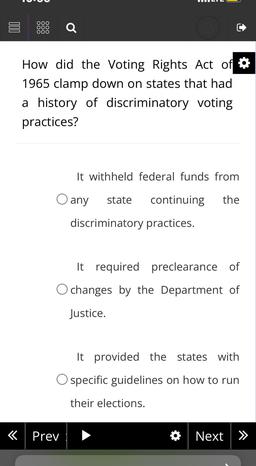 opa How did the Voting Rights Act of 1965 clamp down on states that had a history of discriminatory voting practices? It withheld federal funds from O any state continuing the discriminatory practices. It required preclearance of O changes by the Department of Justice. It provided the states with O specific guidelines on how to run their elections. < Prev Next >> 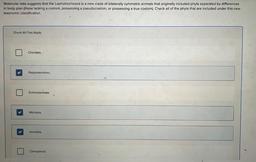 Molecular data suggests that the Lophotrochozoa is a new clade of bilaterally symmetric animals that originally included phyla separated by differences in body plan (those lacking a coelom, possessing a pseudocoelom, or possessing a true coelom). Check all of the phyla that are included under this new taxonomic classification. Check All That Apply Chordata. Platyhelminthes. Echinodermata. Mollusca Annelida. Ctenophora.

Question 3 1.5 pts Imagine that you find an animal washed up on the beach. You see that it is bilaterally symmetric with a complete (1-way) digestive tube. Which taxa could it not belong to? Select all that apply. O Cnidaria O Platyhelminthes O Porifera Nematoda O Annelida O Mollusca

Question 4 1.5 pts The adaptations that Tetrapod lineages evolved to invade and diversify on land included the evolution of (select all that apply) bony skeletons from cartilagenous skeletons Amniotic eggs from gelatinous eggs limbs from fins jaws from gillarches/bars O lungs from a swim bladder O teeth

Question 21 Honorlock 4 pts Chat Discussions For this question on the theory of evolution by natural selection, please pick one and only one!) of the following questions and answer it in a paragraph of approximately 4-5 sentences. Note: this question is worth 4 points. Panopto Recordings 1. Identify a common misconception about evolution and explain why it is not true. Collaborations OR 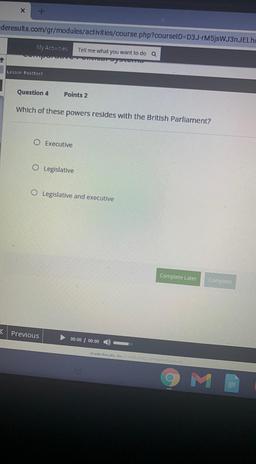 X deresults.com/gr/modules/activities/course.php?courselD=D3J-FM5jsWJ3nJELA My Activities Tell me what you want to do a Lesson Posttest Question 4 Points 2 Which of these powers resides with the British Parliament? 0 Executive O Legislative O Legislative and executive Complete Later Complete < Previous 00:00 00:00 Grade Results, inc M 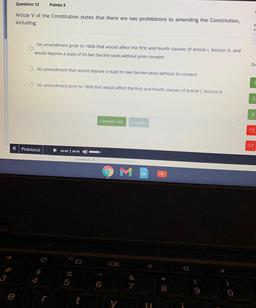 Fossils provide scientists with evidence that allows them to hypothesize how living organisms have evolved over time. Tiktaalik roseae was a unique organism that has been nicknamed the "fishapod" because it is believed to be a species had traits of both fish and tetrapods, the first four-legged animals. Which evidence would scientist use to make the connection between ancestry of fish and tetrapods using Tiktaalik roseae? a) using transitional forms b) using relative dating c) studying decreasing complexity d) studying analogous structures