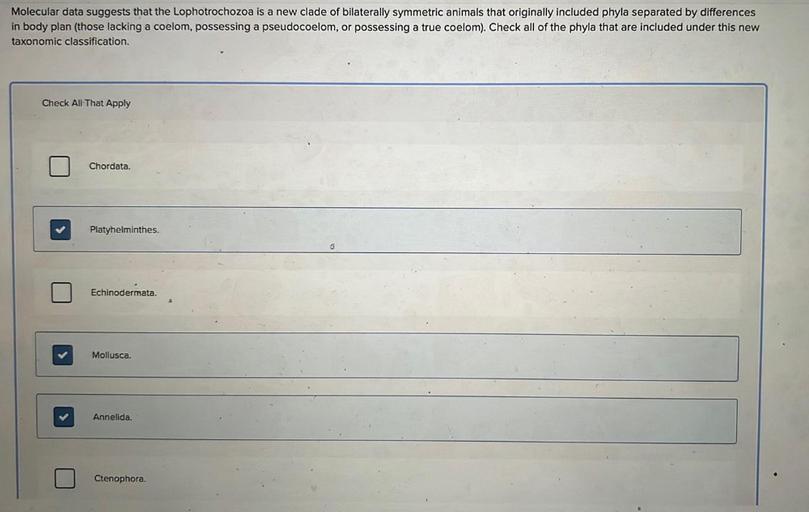 Molecular data suggests that the Lophotrochozoa is a new clade of bilaterally symmetric animals that originally included phyla separated by differences in body plan (those lacking a coelom, possessing a pseudocoelom, or possessing a true coelom). Check all of the phyla that are included under this new taxonomic classification. Check All That Apply Chordata. Platyhelminthes. Echinodermata. Mollusca Annelida. Ctenophora.

Pre-Lab Questions 2. In order to make a 1% solution, 1 gram of the solid material is suspended in 100ml of the solvent (e.g. H,0). Suppose you want to make 50 ml of 0.8% agarose gel. Calculate how much agarose and buffer you will need. 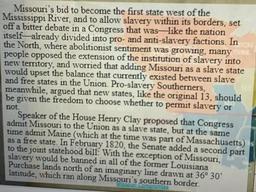 Missouri's bid to become the first state west of the Mississippi River, and to allow slavery within its borders, set off a bitter debate in a Congress that was—like the nation itself-already divided into pro- and anti-slavery factions. In the North, where abolitionist sentiment was growing, many people opposed the extension of the institution of slavery into new territory, and worried that adding Missouri as a slave state would upset the balance that currently existed between slave and free states in the Union. Pro-slavery Southerners, meanwhile, argued that new states, like the original 13, should be given the freedom to choose whether to permit slavery or not. Speaker of the House Henry Clay proposed that Congress admit Missouri to the Union as a slave state, but at the same time admit Maine (which at the time was part of Massachusetts) as a free state. In February 1820, the Senate added a second part to the joint statehood bill: With the exception of Missouri, slavery would be banned in all of the former Louisiana Purchase lands north of an imaginary line drawn at 36° 30' latitude, which ran along Missouri's southern border. Missoun compromise

A Moving Question 11 Ciprofloxacin is an example of this class of drugs related to quinine which target DNA replication by preventing unwinding of DNA, O Fluroquinolones O Rifampin O Monobactams O Aminoglycosides