15. A researcher claims that genetic variation provides organisms with the ability to survive and reproduce in different environ

15. A researcher claims that genetic variation provides organisms with the ability to survive and reproduce in different environments. To support the claim, the researcher makes the following observation: bacteria that contain plasmids (small DNA molecules) are resistant to a wider range of antibiotics than are bacteria that contain no plasmids. Which of the following statements best establishes a connection between the observation and the researcher's claim? a. Some antibiotics inhibit the synthesis of bacterial cell walls. b. Some antibiotics inhibit protein synthesis in bacteria cells. c. Some plasmids cannot exist in a bacterial cell with certain other plasmids. d. Some plasmids contain antibiotic resistance genes. 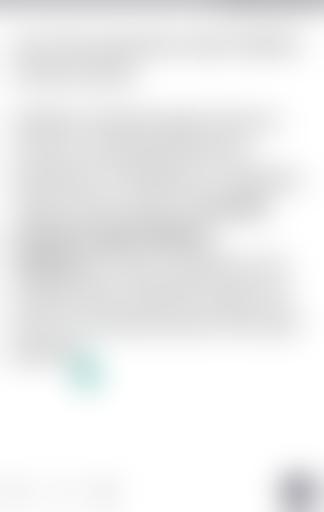 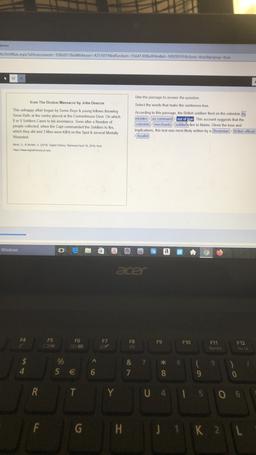 rome mts/test Nav.aspx?idAssessment 1586817&idWebuser4251079&idSection 1564130&idHtmilet-10928591&close true&popup=true Use the passage to answer the question, from The Boston Massacre by John Deacon Select the words that make the sentences true. This unhappy affair began by Some Boys & young fellows throwing Snow Balls at the sentry placed at the Customhouse Door On which 8 or 9 Soldiers Came to his assistance. Soon after a Number of people collected, when the Capt commanded the Soldiers to fire, which they did and 3 Men were kill'd on the Spot & several Mortally Wounded According to this passage, the British soldiers fired on the colonists by mistake on command out of fear This account suggests that the colonists merchants soldiers are to blame. Given the tone and implications, this text was most likely written by a Bostonian British official loyalist Minta S. & McNeil, S. (2013) Digital History. Retrieved April 18, 2010, from https://www.digitahistorychedu a Windows o a acer F5 F6 F4 Z FZ F8 F9 F10 F11 NumLk F12 Serk A sk 8 % 5 € 6 4 & 7 (9 9 8 0 R T Y | 4 | 5 06 F G G H 1 K 2 L 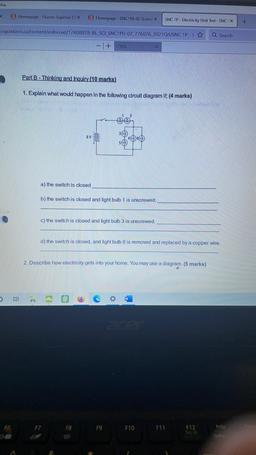 Question 10 10 pts Xavier and his four friends are all in a group for the zoo field trip. Each student in the group was assigned a different animal to investigate and draw on the trip. Using the clues, can you figure out what animal each student is supposed to investigate? • One of the girls was SO happy to have the King Cobra! Stephanie didn't have the tree frog . Kim and Xavier helped the person with the gentoo penguin find their information. • Jennifer's Masai giraffe drawing was great. . The boys had the tree frog and the gentoo penguin . Two of the girls thought it was funny their animals started with the first letter of their names! Kim [ Choose v Jennifer [ Choose v Xavier [ Choose v Stephanie [ Choose [ Greg [Choose v