To ch Mam texty eduween/undur Student Dashboard Take Test Quiz: The Early Church . Not allowed. This test can only be taken once 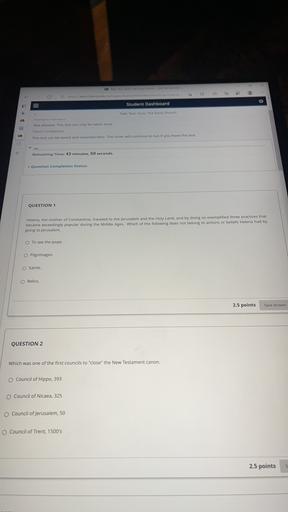 To ch Mam texty eduween/undur Student Dashboard Take Test Quiz: The Early Church . Not allowed. This test can only be taken once. Force Completion This test can be saved and resumed later. The timer will continue to run if you leave the test Remaining Time: 43 minutes, 50 seconds. Question Completion Status: QUESTION 1 Helena, the mother of Constantine, traveled to the Jerusalem and the Holy Land, and by doing so exemplified three practices that became exceedingly popular during the Middle Ages. Which of the following does not belong to actions or beliefs Helena had by going to Jerusalem. To see the pope. Pilgrimages O Saints. O Relics. 2.5 points Save Answer QUESTION 2 Which was one of the first councils to "close" the New Testament canon. Council of Hippo, 393 O Council of Nicaea, 325 O Council of Jerusalem, 50 O Council of Trent, 1500's 2.5 points S

Ans-Correct option - 0 © (Please Rate To see the people don't be... Download the app for the rest

Question 45 (1 point) A boil on the skin, caused by the bacterium Staphylococcus aureus, is best termed a: O a) focal infection b) polymicrobial infection c) systemic infection d) localized infection 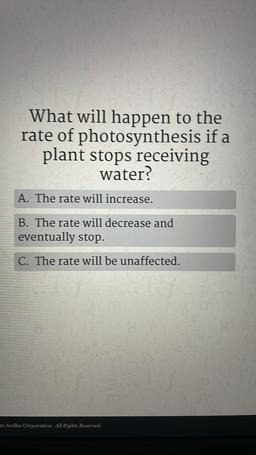 What will happen to the rate of photosynthesis if a plant stops receiving water? A. The rate will increase. B. The rate will decrease and eventually stop. C. The rate will be unaffected. 21 Acellus Corporation. All Rights Reserved.